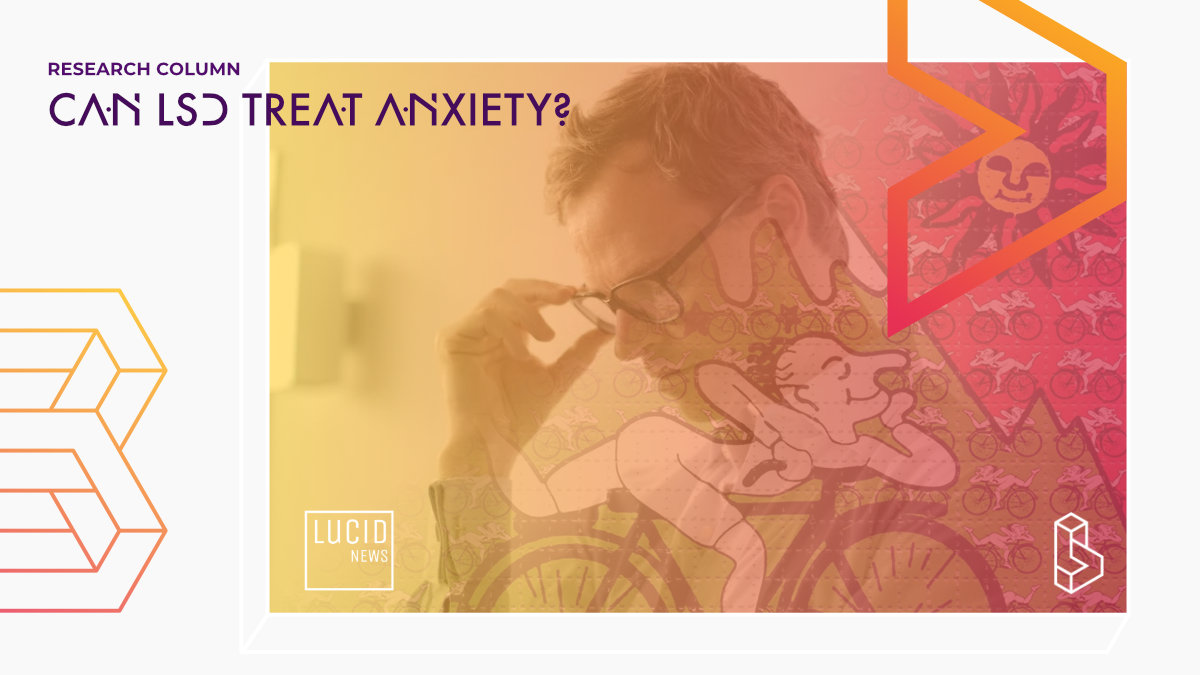 This column was written by Blossom’s founder Floris Wolswijk in cooperation, and co-published, with Lucid News

Psychedelics for anxiety have been significantly understudied.

While there was significant interest in the 1950s and 60s in the potential for LSD to treat anxiety, and over 20 studies at the time, since the turn of the century there have only been eight completed psychedelic clinical trials investigating the topic. Of these studies, most have looked at end-of-life anxiety. This leaves open a whole field of psychedelics for the betterment of mental health.

A new MindMed sponsored Phase II trial seeks to change the narrative and put anxiety research back on the map.

The MindMed study, led by Matthias Liechti and Friederike Holze, found significantly lower anxiety in 65% of the participants who had received two high doses of LSD (200 µg). Only 9% of those in the control group (both groups had about 20 participants) experienced a similar reduction. The anxiety reduction, measured as at least 30% lower anxiety scores, was still present 16 weeks later.

Considering the great potential, it is valuable to review the clinical trials to date and see what has been investigated and how much remains to be done.

The Many Faces of Anxiety

Anxiety manifests in many different forms. Of these forms covered below, most of the researchers have been working on treating end-of-life anxiety (ELA).

ELA is characterized by excessive worrying, agitation, and restlessness about dying. Studies with psilocybin and MDMA have effectively treated ELA. One or two guided psychedelic sessions help those with ELA face their fears and live out the remaining months or years with more equanimity. A meta-analysis (study of studies) showed reductions in anxiety and depression up to six months later.

The use of psychedelics to treat another form of anxiety, social anxiety disorder (SAD), has also been researched. A preliminary study investigating MDMA for SAD in autistic adults found significant reductions in SAD, in most cases lasting, and even slightly improving, six months after the study.

If we group PTSD under anxiety disorders, many more studies show positive effects of MDMA and other psychedelics in treating long-term anxiety. But that being said, almost no studies have looked at generalized anxiety disorder (GAD). If someone is suffering from GAD they have excessive, exaggerated anxiety or worry about everyday life events for no apparent reason. Estimates put the prevalence of GAD at about the same range as PTSD, which is 3-3.5% of the US population.

Many psychedelic studies measure some form of anxiety. Researchers studying depression often include the STAI – State-Trait Anxiety Inventory. This measure often shows reductions in patient groups and healthy participants alike. Even if not explicitly targeted, anxiety is generally lower after psychedelic-assisted therapy.

This is the limited background against which the recent MindMed study was completed. There are clear signs that psychedelics can work for anxiety disorders, but few studies have put it to the test.

The MindMed study is an investigator-initiated trial, meaning that the researchers have designed and led the trial. MindMed funded the research conducted by Liechti, Holze and the rest of the team at the University of Basel.

Commenting on the study results, Liechti is “extremely encouraged by the results, demonstrating the long-lasting and strong reduction in patients suffering from anxiety.” In the trial, a clinical response was seen in 13 out of 20 participants treated with LSD (≥ 30% reduction in STAI-G scores). The response is comparable to other psychedelic studies for depression and anxiety and far above the response in the placebo group, where only two participants showed a clinical response.

No specific therapy protocol was followed in the trial. This doesn’t mean that participants were given a heroic dose of LSD (equivalent to 40mg of psilocybin) and left to their own devices. They were in the experienced hands of Peter Gasser and his colleagues, who have worked with LSD (and MDMA) for decades.

But no specific therapeutic protocol was defined and most participants had their trips without too much interaction. Besides the acute dosing sessions, most participants engaged in more therapy, but the number of preparation and integration sessions is not known.

The lack of a standardized protocol may seem odd but is not too different from what actually happens in other trials. Though MAPS spells out specific therapeutic models, the definitions in their Phase III MDMA-assisted psychotherapy trial are broad enough to encompass anything from psychoanalytical to acceptance and commitment therapy.

While this level of flexibility may be less suitable for a clinical trial, it does reflect how psychedelic-assisted therapy will be provided in real-world situations.

Though the MindMed trial focuses on anxiety, the results also showed a “rapid and lasting reduction in comorbid depressive symptoms.” To Holze and Liechti, these findings are a positive sign for their upcoming Phase II trial of LSD for depression.

Matthew Baggot also shared this sentiment on Twitter, “These results should increase confidence that therapeutic effects are shared by psychedelics as a class.” He also raises the question, “Is LSD a competitive product, or is this just a proof-of-concept?” Here, Baggot is most likely alluding to the very long duration of LSD trips, making it all but unfeasible to use in clinical practice.

Other psychedelics have shown that depression can be significantly decreased even when someone experiences GAD. Most interesting may be the data from the TRANSFORM-2 trial. This 200-person study with esketamine showed that the reduction in depression was not lower for participants who were also suffering from GAD.

The TRANSFORM-2 study shows that a diagnosis of GAD does not prevent one from improving depression scores, whilst the MindMed study shows that both measures move in the right direction at the same time.

Where to Go From Here – Broadening Molecules and Indications

The MindMed study has opened up new avenues in two areas of psychedelic research. First, it has re-engaged research into GAD by becoming the eighth clinical trial, and the largest to date, to examine psychedelics for anxiety. Second, it has dusted off research on LSD, which has seen one clinical trial for every five with psilocybin.

Speaking of psilocybin, researchers at Monash University in Australia, in partnership with Incannex Healthcare, plan to conduct the world’s first clinical trial investigating the use of psilocybin in the treatment of GAD. Led by Paul Liknaitzky, the researchers aim to recruit 72 participants making it the largest psychedelic trial in Australia.

Liknaitzky, head of Australia’s first psychedelic lab, earlier remarked on the value of the study. “Given the early yet highly promising results from other psilocybin trials for different conditions, this treatment may deliver a substantial step forward in the treatment of anxiety disorders.”

Does this mean we will see LSD for anxiety in Phase III trials? I’m afraid this isn’t likely soon. To take one step back, why even do the research with LSD? For researchers like Liechti and Holze, curiosity may be enough reason. But MindMed is spending money to acquire this data for a reason.

As a spokesperson from MindMed explained, “MindMed will be able to use the data gathered in this trial in future applications to the FDA and other regulatory authorities globally.” And that is not where the value of the data ends. Chief Medical Officer, Daniel Karlin, clarifies further that “These data can be used in support of a range of engagements with healthcare authorities, payers, and providers.”

Instead of classic LSD, MindMed plans to test their proprietary version of LSD, MM-120, in a Phase II clinical trial. While this trial had been put on hold, it received approval from regulators at the start of this year. Beginning this quarter, 200 participants will receive a single administration of 200µg of MM-120 or a placebo. Again, an explicit therapy protocol is not specified.

MindMed may have been the first out of the gate to announce results, but it isn’t the only company looking at using psychedelics to treat anxiety disorders. Cybin hopes to use a compound it has developed, CYB004, a molecule based on DMT, to treat both GAD and SAD.

This April Cybin announced the results of preclinical work with CYB004. The molecule showed a rapid onset, a duration of action three times longer than DMT, and similar low variability achieved with a single inhalation compared with intravenous DMT.

A spokesperson from Cybin clarifies that CYB004 “enables the patient to stay in the therapeutic state for longer.” Still, the trip is much shorter than a psilocybin session. Speaking to that differentiation, the spokesperson states, “When considering which molecules to focus on what indication, it comes down to the characteristics of the psychedelic and of the indication. For instance, with CYB004, we know that DMT has a rapid onset of effect and is short-acting; therefore, using it as a potential treatment for anxiety fits well with these characteristics.”

Cybin is also pursuing treatment for major depressive disorder (MDD) with CYB003 and has just completed the FDA filing for a Phase I/IIa combined clinical trial. The reason for the different molecule – CYB003 is based on psilocybin – is the different treatment paradigm for MDD. The spokesperson states, “This is a condition that typically requires years of therapy or antidepressant medication, but a CYB003 may be able to induce months of remission from just a few doses.”

The clinical trials for CYB004 for anxiety are expected to start soon and produce data by the end of 2022.

The recent MindMed study has opened up the possibility of using psychedelics for anxiety. Studies with other molecules, including a variation on LSD from MindMed, are set to be completed in the next two years. The work of Holze and Liechti has shown that psychedelics for anxiety can work. Now, we need to replicate these findings in more participants.