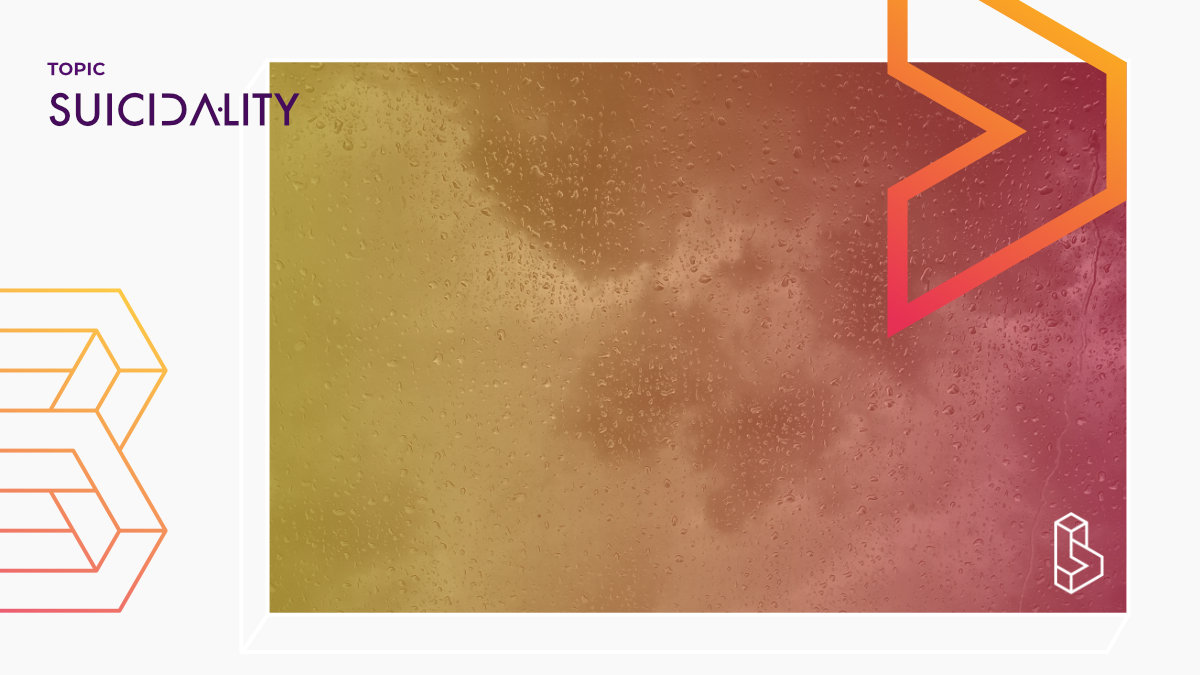 More than 700,000 people die by suicide each year. Suicide is the fourth leading cause of death in people aged 15-19 years old.

Ketamine is showing great potential to help people with suicidal thoughts, a treatment with esketamine (Spravato) is approved for acute suicidal ideation. Additionally, ayahuasca is being explored to reduce suicidality.

The term suicidality is broad term used to refer to a persons want to take their own life. The term encompasses suicidal ideations, suicide plans and suicide attempts. At present, there is no universally accepted definitions for these terms which leads to ongoing challenges for clinicians, researchers, and educators. Sometimes referred to as suicidal thoughts or ideas, suicidal ideation makes reference to a range of contemplations, wishes, and preoccupations with death and suicide (Harmer et al., 2021). While there is a link between suicidal thoughts and mental disorders, such as depression and alcohol use disorder, these types of thoughts and wishes effect a significant portion of the global population regardless of the presence of an underlying mental health disorder. The World Health Organization estimates that there are over 700,000 thousands deaths across the globe annually as a result of suicide, although there are many more people who attempt suicide each year (World Health Organization, 2021). Additionally, the same WHO report found that suicide is the fourth leading cause of death in people aged 15-19 years old. There are many reasons a person may be having suicidal thoughts. As well as being linked to depression and alcohol use disorder, suicidal thoughts are common in anxiety, personality, and trauma-related disorders (Brådvik, 2018). Other risk factors include; a previous suicide attempt, financial problems, employment issues, family history of suicide and relationship problems, amongst others (Centers for Disease Control, n.d).

Given that people from all walks of life may experience suicidal ideations for a various number of reasons, diagnosing the underlying causes and determining the best treatment can be difficult. Generally, people experiencing such thoughts are given a number of assessments by a medical professional. Suicide risk assessment include determining if there is a underlying mental health disorder, assessing physical health, alcohol and drug use as well as determining if a person is prescribed any medications that may cause suicidal feelings as a side effect (Mayo Clinic, 2018). A number of specific tools for suicide risk assessment exist such as the Patient Health Questionnaire-9 (PHQ9), the Columbia-Suicide Severity Rating Scale (C-SSRS) and the Suicide Assessment Five-Step Evaluation and Triage (SAFE-T). Treating suicidal thoughts and behaviours depends on a persons specific situation and what underlying problems may be causing the suicidal thoughts or behaviour (Mayo Clinic, 2018). Psychotherapy is often used to explore why people are feeling suicidal and how to cope with their thoughts. A recent study found that the most used forms of psychotherapy are dialectical behavioural therapy (DBT) and cognitive behavioural therapy (CBT). Furthermore, people often receive treatment for underlying problems with drugs and alcohol as well as changing everyday behaviours such as diet, exercise and managing stress. As suicidal ideations are often experienced as part of an underlying mental disorder, disorder-specific medications such as antidepressants, antipsychotics or anxiolytics, may be prescribed. However, many of these medications do not offer immediate benefit to someone who is contemplating suicide. For example, many antidepressants can take weeks or months to exert their effects (University of Illinois at Chicago, 2016). Moreover, it has been found that antidepressants, particularly SSRIs and SNRIs can even exacerbate suicidal ideations (The Pharmaceutical Journal, 2016). Thankfully, the new wave of psychedelic research we are experiencing is paving the way toward psychedelics becoming a viable treatment option for people with suicidal ideations.

Given that suicidal ideations often accompany mental health disorders, much of the data regarding the safety and effectiveness of psychedelics for treating suicidal ideations comes from studies on mental health disorders like major depressive disorder, anxiety disorders and PTSD, amongst others. At present, the results of clinical trails would suggest that the most promising psychedelic for alleviating suicidal ideation is the non-classic psychedelic, ketamine. A plethora of research exists regarding the efficacy of ketamine to alleviate symptoms of depression and suicidal ideation. This may be due to the legal status of ketamine which makes it easy to procure and work with when compared to other psychedelics. Recently, the FDA approved esketamine, a rapidly acting derivative of racemic ketamine which is administered as a nasal spray, for the treatment of treatment-resistant depression. This nasal spray is sold under the brand name Spravato and is manufactured by Janssen Pharmaceuticals. Recently, a team of researchers published a pooled analysis of two phase-III clinical trials exploring the effects of esketamine in people with major depressive disorder and suicidal ideation. The researchers found significant improvements in measures of depression and suicidality during assessments at 4 hours, 24 hours, and 25 days after the first dose. An earlier trial in a similar study population found that a single dose of ketamine administered intravenously led to significant clinical improvements which were maintained for up to 6 weeks, measured using the Suicidal Ideation Scale (SSI). With conventional pharmacological interventions taking time to exert their therapeutic effects, the ability of ketamine to rapidly alleviate symptoms of depression and suicidality cannot be ignored given the potentially fatal outcome of suicidal ideation.

Other psychedelics also have the potential to reduce suicidality. A member of the research team of at Imperial College London, Richard Zeifman has been exploring the influence psychedelic’s like ayahuasca have on suicidality. Zeifman and colleagues (2019) were the first to conduct a trial clinical trial on the effects ayahuasca has on suicidality. Although the results of this trial didn’t reach significance, their findings still suggest that ayahuasca has potential to reduce suicidal ideation. Moreover, by conducting a secondary-analysis on data from an open-label trial investigating the effects of ayahuasca on people with major depressive disorder, Zeifman and colleagues (2020)  found that when administered in the appropriate context, ayahuasca may lead to rapid and sustained reductions in suicidality among individuals with MDD. Nonetheless, further research is needed to determine the effectiveness of ayahuasca in this particular population. Currently there are no companies focusing on this specific aspect of psychedelic science. However, this may be due to the fact that Janssen already holds the patent for the psychedelic which holds the most promise, ketamine. With many other companies focusing on the use of psychedelic’s to treat depression, their findings may translate to suicidality as research progresses in due course.

These are the institutes, from companies to universities, who are working on Suicidality.

These are some of the best-known people, from researchers to entrepreneurs, working on Suicidality.

Ketamine for suicidality: an umbrella review

Prospective association of psychological pain and hopelessness with suicidal thoughts

A Pilot Study of Ketamine Infusion after Suicide Attempt: New Frontiers in Treating Acute Suicidality in a Real-World Medical Setting

Past-Year Hallucinogen Use in Relation to Psychological Distress, Depression, and Suicidality among US Adults

Ketamine Use for Suicidal Ideation in the General Hospital: Case Report and Short Review

Improvement in suicidal ideation after ketamine infusion: Relationship to reductions in depression and anxiety

Does psychedelic drug use reduce risk of suicidality? Evidence from a longitudinal community-based cohort of marginalised women in a Canadian setting

The effect of single administration of intravenous ketamine augmentation on suicidal ideation in treatment-resistant unipolar depression: Results from a randomized double-blind study

Use of repeated intravenous ketamine therapy in treatment-resistant bipolar depression with suicidal behaviour: a case report from Spain

Do sleep changes mediate the anti-depressive and anti-suicidal response of intravenous ketamine in treatment-resistant depression?

The Impact of Ayahuasca on Suicidality: Results From a Randomized Controlled Trial.

Psychopharmacological Agents and Suicide Risk Reduction: Ketamine and Other Approaches

Relationships between reduction in symptoms and restoration of function and wellbeing: Outcomes of the Oral Ketamine Trial on Suicidality (OKTOS)