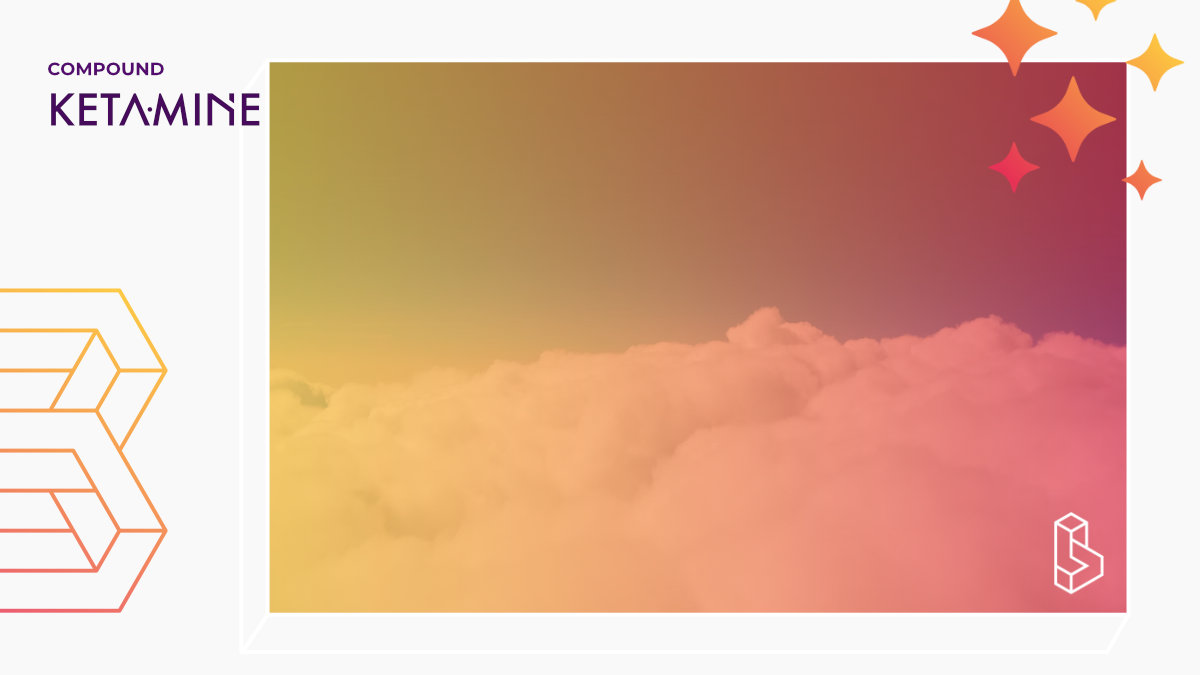 Ketamine was first synthesised in 1956 and is used most commonly in veterinary practice as an animal tranquilliser. It is also a human anaesthetic and a powerful psychoactive substance and is available in liquid-soluble form as ketamine hydrochloride. Ketamine was granted US FDA approval for medical use as a general anaesthetic and sedative back in 1970 and has been classified as ‘safe to use’ as an anaesthetic because it does not reduce blood pressure or compromise a patient’s respiratory system. Ketamine may be injected into the muscle (IM), passed through an intravenous (IV) drip, taken orally, or absorbed via an oromucosal (nasal) spray.

Ketamine is the most widely studied psychedelic to date. Excluding studies that look at the anaesthetic effects of ketamine, there are 140 clinical trials of which 22 are phase III trials and 32 are phase IV trials. Phase IV trials observe the real-world application of approved medicines in large patient populations to monitor the effectiveness, after it has been approved. Ketamine has been shown to be effective, starting almost immediately and then for up to seven days or more, for a wide range of mental health disorders. The following is a list of conditions for which ketamine has potential therapeutic benefits based on clinical trials and academic studies conducted to date:

In these 140 clinical trials, nearly 11,000 patients have been enrolled as of July 2021. Among the active trials are those investigating ketamine for the treatment of depression in veterans, ketamine for the treatment of depression in teenagers and late-life depression, and a head-to-head comparison of ketamine versus electroconvulsive therapy for depression. Some studies are taking place in China, Israel, the United Kingdom, Canada and Mexico; most studies however are being done in the US.

More than 100 clinical trials have investigated the effectiveness of ketamine for the treatment of mental health disorders. The overwhelming conclusion states that ketamine is effective in the acute treatment of all forms of depression (MDD, TRD, bipolar disorder, postpartum depression (PPD)), suicidal ideation, and PTSD. The effects are usually noticeable in the first few hours and persist at a high level up to seven days later. The effectiveness of ketamine wears off in the days afterwards and some studies find that patients are back to baseline in 28 days. The lack of long-term effects could be to do with the different ways ketamine interacts with the brain, the lack of talk therapy in many trials, and other factors. However, ketamine’s benefit also extends to those who require immediate relief and may prefer to gain an alleviation of symptoms, without engaging in the process of talk therapy.

Two studies at the start of 2021 have added evidence for the long-term effectiveness of ketamine when administered repeatedly. The first study, from the Washington University School of Medicine, found that a 96-hour infusion of intravenous ketamine lowered depression scores for those with TRD, up to eight weeks later. The second study gave six weekly oral doses of ketamine for those suffering from suicidal ideation and found significant reductions up to four weeks after the end of the study.

A review of studies of ketamine in the treatment of depression in patients with a history of psychosis or current psychotic symptoms showed that the available literature does not support the assumption that ketamine exacerbates psychotic symptoms in those patients. The review was limited in sample size (41 patients) but it stands out because psychotic patients are excluded in nearly every other trial with psychedelics in order to limit risks.

Ketamine has been shown to be effective in the treatment of several substance use disorders. One double-blind, placebo-controlled study in December 2019 investigated the effects of ketamine in combination with motivational enhancement therapy to treat alcohol use disorder. A single administration of ketamine, in combination with talk therapy, improved the number of days the participants weren’t drinking and also reduced the number of heavy drinking days.

In March 2020, a study from Louisiana State University examined the comparative efficacy of psilocybin and ketamine in rodent models. The study found that a single administration of psilocybin, or LSD, produced persistent anti-depressant-like effects in the rodent model. In contrast, ketamine produced only a transient antidepressant-like effect. The results of the study indicate that classic psychedelics may have therapeutic efficacy that is more persistent than ketamine.

Several studies in Europe are comparing the effectiveness of ketamine with that of electroconvulsive therapy (ECT). ECT is a procedure whereby small electric currents are passed through the brain to induce a generalised seizure. Although the treatment has been shown to be effective, it also comes with side effects and patients need to be under general anaesthesia during the treatment. The comparative studies are still ongoing, but early results show that those undergoing ketamine treatment experience fewer side effects and the antidepressant effects are visible quicker.

Asia, as a region, is proving to be a ‘late adopter’ in terms of clinical research into the potential health benefits of psychedelics. Only a single clinical trial, out of a total of over 16,000 registered in China, involves the use of any psychedelic substances as interventions, with one exception: ketamine. Nine clinical trials have originated in China, two of these studies investigate PPD; ‘baby blues’ after childbirth. Administering one dose of ketamine after childbirth may be able to prevent PPD.

Most recently the benefits of ketamine for treating severe TRD have been recognised. Having become the first company to patent one half of the ketamine molecule, esketamine, Janssen Pharmaceuticals, a subsidiary of Johnson & Johnson, has developed a nasal spray to treat TRD under the brand name Spravato, which received FDA approval in March 2019 and authorisation from the EMA in December of the same year. It is the first new drug introduced (as part of a broader treatment regimen) for the treatment of depression in over 35 years and the only psychedelic substance with marketing approval to treat a mental health condition.

There are two phases within the treatment regimen:

Spravato is administered in tandem with an oral antidepressant. In February 2020, NICE in the UK rejected the use of Spravato, based on efficacy and cost-effectiveness grounds. There has been some controversy surrounding the approval of Spravato by the FDA, given the likely expense associated with its administration, as well as questions about its abuse potential and safety concerns (six participants died while on the trial, three of whom committed suicide). Despite this, Spravato was approved by the FDA for treatment of a second mental health condition in August 2020, namely for the treatment of suicidal ideation.

A number of highly respected universities, for example, Columbia University in the US, have opened academic medical centres, treating patients with severe TRD through ketamine therapy. There is also a ketamine treatment centre in the UK where patients pay privately for treatment, although the venture is supported by the National Health Service (NHS) and the Oxford Trust.

On 4 March 2020, Field Trip Health, a subsidiary of Field Trip Psychedelics, announced the opening of its first psychedelic-assisted psychotherapy clinic in Toronto, which uses ketamine assisted therapy as part of a broader psychotherapy protocol to treat depression. Similarly, in July 2020, Novamind closed the
acquisition of a chain of clinical research sites and psychiatry clinics specialised in ketamine assisted psychotherapy operating in Utah since 2016. Ketamine is not an FDA-approved drug for mental health conditions such as depression, so when administered for these health indicators is done ‘off label’.

A growing number of private clinics are offering such treatments across the US, although these are less likely to be subject to the same medical oversight as those in academic medical centres. However, some of the clinics offer talk therapies alongside ketamine infusions and emphasise the integration of the experience as an important part of the treatment. Reid Robison, Director and Chief Medical Officer at Novamind, said, ’dosing begins with intention setting and ends with the processing of the experience. When administered, psychedelics act on the serotonin receptors that are linked to cognitive flexibility, enhanced imagination and creative thinking. It provides a window of opportunity to disrupt patterns in the brain. The integration session is where we can make lasting changes. It allows individuals to explore their psychedelic experience and discover insights and meaning that can be incorporated into day-to-day life.

Ketamine has been legal for medical use by medical professionals and veterinarians for decades in most parts of the world. In 1985, ketamine was placed on the WHO List of Essential Medicines and is currently one of the most widely used sedatives in the world.

A WHO expert committee has repeatedly recommended against placing ketamine on international controlled substance lists, as controlling the drug could make accessing it for medical purposes more difficult. In 2015, following the most recent review of its efficacy, the organisation stated ‘the medical benefits of ketamine far outweigh the potential harm from recreational use.’ The WHO has also stated that, in its view, ketamine does not pose a sufficient health risk to warrant scheduling under the 1961 and 1971 conventions.