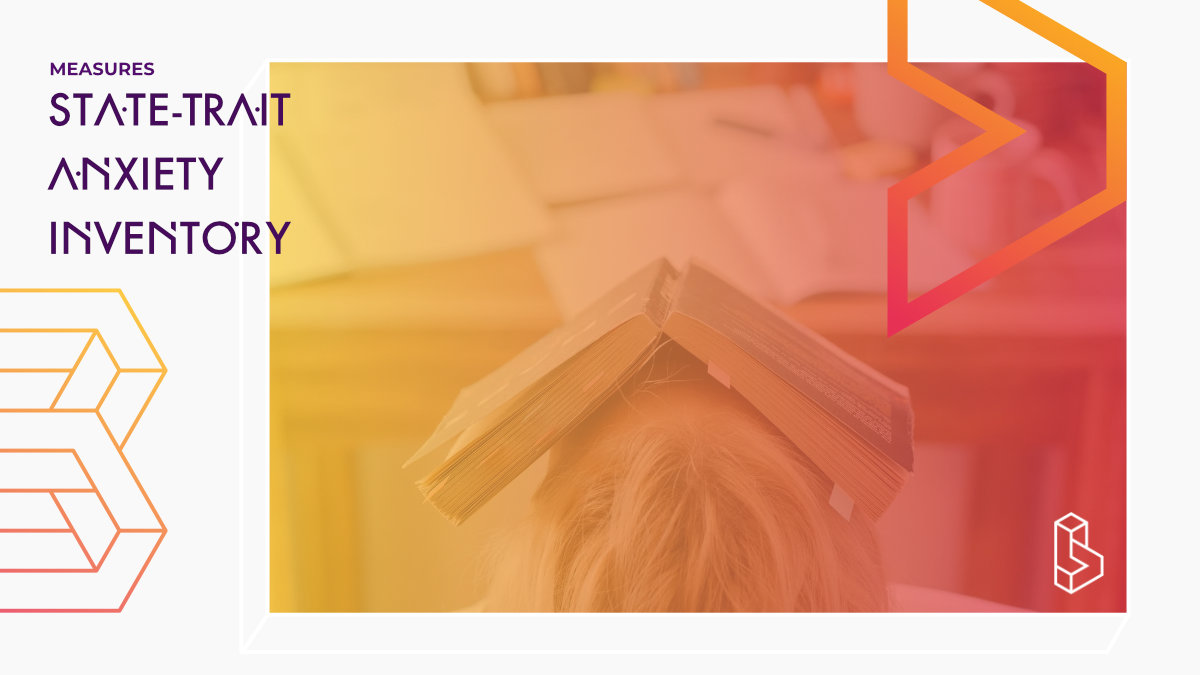 The State-Trait Anxiety Inventory (STAI) is a commonly used measure of trait and state anxiety. The scale is based on a 4-point Likert scale and consists of 40 self-report questions. The STAI measures two types of anxiety – state anxiety, anxiety about an event, and trait anxiety, anxiety level as a personal characteristic.

Lysergic acid diethylamide-assisted therapy in patients with anxiety with and without a life-threatening illness A randomized, double-blind, placebo-controlled Phase II study
This double-blind cross-over trial (n=42) finds that LSD (200 μg) significantly reduced anxiety (STAI-G) scores up to three months after treatment. The patients, both with and without a life-threatening illness, also improved on measures of depression (HAM-D, BDI). Those with more subjective drug effects and mystical-type experiences had better outcomes.

MDMA-assisted psychotherapy for treatment of anxiety and other psychological distress related to life-threatening illnesses: a randomized pilot study
This double-blind, placebo-controlled study (n=18) with MDMA (125mg, 2-3 sessions) in combination with psychotherapy found no significant difference in anxiety in a population with life-threatening illnesses. Though no significant group difference was found (p=.056), the study showed a large effect size (g=1.03) and a larger sample size might find a significant difference (favouring MDMA).

Decreases in State and Trait Anxiety Post-psilocybin: A Naturalistic, Observational Study Among Retreat Attendees
This naturalistic study (n=52) assessed the effects psilocybin has on measures of state and trait anxiety among retreat participants with subclinical levels of anxiety. Average psilocin consumption across individuals was 27.1 mg. The morning after the ceremony, medium reductions in both state and trait anxiety were observed and these reductions persisted for 1-week. Higher ratings of ego dissolution and changes in neuroticism were the strongest predictors of these reductions.

Evaluation of Psilocybin in Anorexia Nervosa: Safety and Efficacy
The primary aim of this study is to assess the safety and tolerability of one 25 mg dose of psilocybin in participants with anorexia nervosa based on adverse events (AEs), changes in vital signs, electrocardiograms (ECGs) and clinical laboratory tests. The secondary objectives are to explore the efficacy of a single 25 mg dose of psilocybin on eating disorder symptoms and behaviors, body image, anxiety, food related obsessions and rituals, and body weight.

LSD Treatment in Persons Suffering From Anxiety Symptoms in Severe Somatic Diseases or in Psychiatric Anxiety Disorders
To test the efficacy of LSD in patients with anxiety with or without life-threatening diseases.

Lysergic Acid Diethylamide (LSD)-Assisted Psychotherapy in People With Illness-related Anxiety
This study will find out whether psychotherapy combined with lysergic acid diethylamide (LSD) is safe and is helpful in people who are anxious because they have a potentially fatal disease. The study will measure anxiety and quality of life before and after people have two sessions with either full or active placebo dose of LSD. They expect LSD-assisted psychotherapy to reduce anxiety and improve quality of life.

MDMA-assisted Psychotherapy for Anxiety Associated With a Life-threatening Illness
This Phase 2 pilot study is a randomized, double-blind, placebo-controlled study in 18 participants comparing the effects of MDMA-assisted therapy vs. placebo with therapy.

Psilocybin Cancer Anxiety Study
The primary objective of this double-blind, placebo-controlled pilot study is to assess the efficacy of psilocybin administration (4-phosphoryloxy-N,N-dimethyltryptamine), a serotonergic psychoactive agent, on psychosocial distress, with the specific primary outcome variable being anxiety associated with cancer. Secondary outcome measures will look at the effect of psilocybin on symptoms of pain perception, depression, existential/psychospiritual distress, attitudes towards disease progression and death, quality of life, and spiritual/mystical states of consciousness.