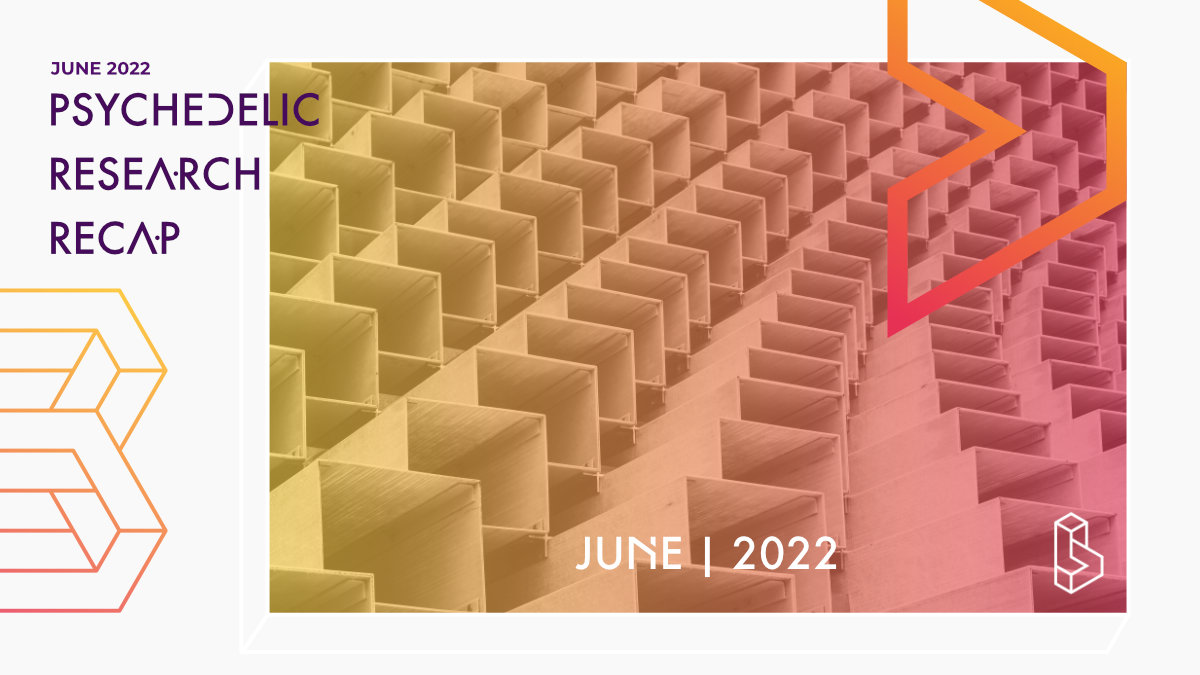 Summer is officially here, and psychedelic researchers are continuing their efforts to turn these medicines into viable therapy options. Despite relatively few clinical trials published in June, we’re continuing to learn more about the effects of psychedelics through the reanalysis of existing datasets and surveys. Moreover, researchers continue to hypothesise how psychedelics work on the brain and discuss their potential for treating many disorders.

You can find all the papers in our database and those that weren’t added in our June Link Overview.

Psychedelics put to the test

Over the past month, researchers published several clinical trials with human participants. Most notably, they explored the antidepressant effects of DMT. Also, some early evidence suggests that LSD can have a nootropic effect. One rodent study worth highlighting found that ketamine and psilocybin did not elicit any antidepressant or anxiolytic effects in rats.

Deepak D’Souza and his team at Yale University carried out an open-label dose-escalation study exploring the effects of intravenous DMT in healthy volunteers (n=3) and participants with major depressive disorder (n=7). Across both groups, DMT was well tolerated and led to significant reductions in depression scores the day after the high dose. Despite the positive results, a larger sample is needed to confirm the antidepressant effects.

A double-blind placebo-controlled study (n=25) assessed the effects of LSD on metabolic pathways associated with neural plasticity in both humans and rodents. LSD treatment in humans (50μg, small/moderate dose) enhanced performance in a visuospatial memory task in humans. And in a novel object recognition task in rodents indicated that LSD has a nootropic effect. LSD-induced neural plasticity may underlie these cognitive gains in rats and humans.

In a blinded doses-escalation study with Salvinorin A in healthy participants (n=10), salvia produced psychotomimetic effects and perceptual alterations including dissociative and somaesthetic effects, increased plasma cortisol and prolactin and reduced resting EEG spectral power but did not produce euphoria, cognitive deficits or changes in vital signs.

In this posthoc analysis, six repeated ketamine infusions (0.5mg/kg) in anxious depressed patients were associated with a relatively lower antianhedonic response (47.8 % versus 51.2 %, p > 0.05) and remission (17.4 % versus 27.9 %, p > 0.05) than their non-anxious counterparts. Across both groups, a significant reduction in anhedonic symptoms was observed from the first infusion to the last infusion and at a 2-week follow-up.

In this rodent study, ketamine and psilocybin increased the levels of dopamine, serotonin, glutamate and GABA extracellular levels in the frontal cortex, while psilocybin also increased GABA in the reticular nucleus. However, contrary to many findings in human (and other rodent) participants no antidepressant or antianxiety effects were observed.

A fresh perspective on existing data

This study analysed data from two Phase II and one Phase III trials from MAPS where MDMA-assisted therapy (MDMA-AT) was used to treat PTSD in order to compare the efficacy and safety of MDMA-AT between Black, Indigenous, and People of Color (BIPOC) and non-Hispanic White participants. No significant ethnoracial difference in CAPS-5 scores was observed while BIPOC participants trended toward greater reductions following MDMA-AT.

In this meta-analysis, the effectiveness of ketamine for treatment-resistant depression (TRD) using real-world data was explored. While the mean antidepressant effect of ketamine was found to be significant, there are high levels of variability between patients. Treatment effects were found to be similar following repeated treatments.

In a separate study, a machine learning model was applied to an EEG dataset from a study involving ayahuasca to investigate the ability of machine learning and complex network measurements to automatically detect changes in brain activity. Machine learning proved to be consistent with the current literature and showed the highest accuracy in detecting the correlation of the EEG time series.

David Glowacki and his team introduced us to “Isness-D” – a VR framework which harnesses the unique affordances of distributed multi-person VR to blur conventional self-other boundaries. They reanalysed data from self-report scales previously applied to analyse subjective psychedelic drug phenomenology finding that Isness-D scores were indistinguishable from recently published studies with psychedelic drugs.

Using the eudaimonic perspective of well-being, this survey (n=750) found that perceived benefits to narrative self-functioning are one pathway through which integration of psychedelic experience may promote optimal well-being for both clinical and non-clinical populations.

This review of surveys that quantified the self-reported efficacy of two or more cluster headache (CH) treatments found that the consistently reported efficacy of psilocybin and LSD in the treatment of CH in these surveys indicates the need for clinical studies in this area.

Reviews and the rest

This systematic review explores the potential mechanisms by which combined psilocybin and mindfulness treatment could adjust neural activity underlying social anxiety disorder (SAD) and exert therapeutic effects. Proposed mechanisms include changes in cognitive processes like biased attention to threats linked to SAD by modulating connectivity of the salience network.

Upon reviewing the neurocognitive effects of subanesthetic doses of intravenous ketamine in pharmacological studies among healthy subjects and patients with PTSD or depression, no significant impairment in cognitive function was found in patients with depression and possible in those with PTSD.

This review explored the use of structured associated psychotherapeutic interventions in psychedelic clinical research to construct a picture of what models of psychedelic-assisted psychotherapy are currently adopted in such research.

A review of the role of neuroimaging techniques in the development of psychedelic therapy suggests that the modern development of psychedelic therapy has benefitted greatly from these techniques. It is suggested that current knowledge gaps in the field could be addressed using combined Positron Emission Tomography (PET) and Magnetic Resonance Imaging (MRI) methods, and more.

A new book chapter from Matthew Johnson reviews the use of psilocybin in the treatment of addiction with a specific focus on smoking cessation.

This paper makes the case for using MDMA to treat symptoms of schizophrenia and proposes possible mechanisms of action. The role of psychedelics in the treatment of postpartum depression is also explored.

This month we added 32 psychedelics papers published in June 2022. We also linked to over 80 more papers in our June Link Overview. Despite many researchers being likely to take a well-deserved summer holiday, we here at Blossom will continue to make the latest information on psychedelics as medicine easily accessible.