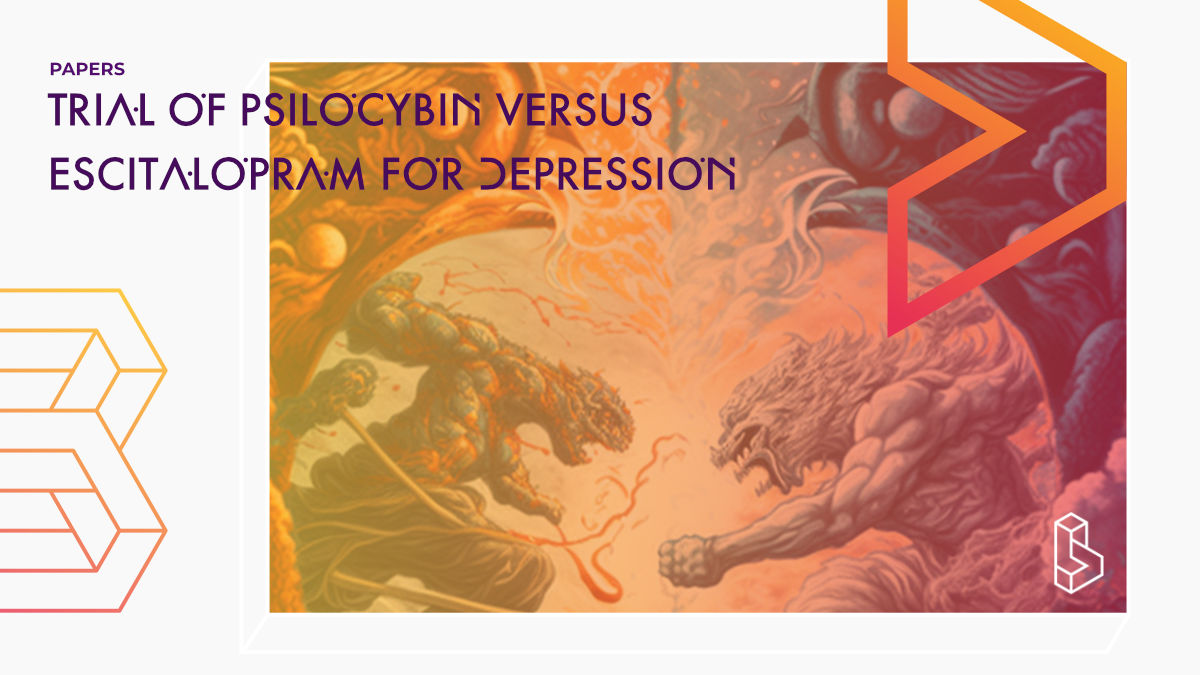 This double-blind placebo-controlled study (n=59) compared psilocybin (2x25mg; 3 weeks apart) to escitalopram (SSRI) over a six-week period and found large improvements in depression scores for those suffering from depression (MDD) in both groups. On the main measure of depression, the QIDS-SR-16, there was no significant difference between both groups. The study did find significant differences, favouring psilocybin, on the HAM-D-17, MADRS, avoidance, flourishing, wellbeing, and suicidality.

“Background Psilocybin may have antidepressant properties, but direct comparisons between psilocybin and established treatments for depression are lacking.

Conclusions On the basis of the change in depression scores on the QIDS-SR-16 at week 6, this trial did not show a significant difference in antidepressant effects between psilocybin and escitalopram in a selected group of patients. Secondary outcomes generally favored psilocybin over escitalopram, but the analyses of these outcomes lacked correction for multiple comparisons. Larger and longer trials are required to compare psilocybin with established antidepressants.”

This paper was also featured on the podcast (at 39:00min) by Drug Science with Robin Carhart-Harris and David Nutt. And an interview with Matthew Johnson (not part of the study) for HealthDay. And commentary in The Guardian by Robin Carhart-Harris. And an excellent breakdown in The Trip Report. And (last but not least) on The Tab.

An ‘expert reaction‘ is also provided by James Rucker for Science Media Center. And an op-ed in Psychedelics Today. And recently, two articles (1, 2) in Psychedelic Science Review.

This study is investigating the effects of psilocybin versus escitalopram (brand names: Cipralex/Lexapro), a commonly prescribed antidepressant (SSRI) for the treatment of major depressive disorder (MDD).

Depression affects between 2% to 6% of the world population (Our World in Data, 2017). As a cause of burden of disease, the WHO ranked it as the third-highest, and projected it to rise to the number one spot by 2030. The paper approximates that MDD affects 10% of the population, but this is not found in the linked source (Malhi & Mann, 2018), and might be referring to lifetime prevalence (although that is estimated at 15-18%).

Escitalopram is an antidepressant that works by selectively inhibiting the reuptake of serotonin. As with many other antidepressants, it is generally believed that it works by dampening or blunting of emotions/affect and via that route also lessening depressive symptoms. This is very much a simplification, but also something where it’s very much in contrast to how psilocybin is thought to work.

A review (Waugh & Goa, 2012) of escitalopram usage for depression and anxiety disorders showed that it was effective as measured on the MADRS, CGI-I, CGI-S, and HAM-D depression scales. The review notes that the recommended dose is 10mg/day with the possibility of increasing it to 20mg/day. In the current study, this increase in dose was done for all patients for the last three weeks. Scores on the MADRS in several double-blind studies decreased from a baseline of 28.5 (average) by 12 points to 16.5 after four weeks, and by 14.7 points to 13.8 after eight weeks. (see table II, n=587)

Regarding this review, and also the current study, it should be noted that the placebo group (usually also receiving therapy) also improved by quite a lot. On average their scores were 10 points lower after four weeks, and 12 points lower at eight weeks.

The cost of escitalopram ranges widely, but has not been sold as a generic medicine (without the brand name) and can be found as low as $0.23 per 10mg tablet.

The psilocybin (COMP360) used in the trial was provided by Compass Pathways. The company, nor any other company, had any involvement in this study.

The participants in the study were recruited informally via social media and other sources. As is noted in the discussion, the patient group of white and highly educated men is not representative of the wider population. Studies with a higher percentage of women (who are disproportionally affected with depression) and those with other relationships to mental health care and socioeconomic backgrounds should be evaluated in future trials.

Patients visited the study site a total of six times. At the first visit, they underwent fMRI scans, cognitive tests, affective processing tasks, and a preparatory therapeutic session. One day later, they received either 25mg of psilocybin or 1mg (as a placebo) of psilocybin. The next day, visit three, consisted of a debrief of the second day.

After that, patients took one pill (placebo or 10mg of escitalopram) for the next 21 days.

The fourth and fifth visits mirrored that of the second and third days. For the next 21 days, participants took two pills per day (placebo or 20mg of escitalopram in total).

Then on the final day, the same tests as on the first day were repeated. The study also investigated adverse events, and two measures of acute subjective experience after the dosing days.

The primary outcome, the QIDS-SR-16, significantly decreased for both groups.

Many of the secondary measures did show that psilocybin was significantly more effective. Somewhat conservatively, the authors do note: “Secondary outcomes generally favored psilocybin over escitalopram; however, the confidence intervals for the between-group differences were not adjusted for multiple comparisons, and no conclusions can be drawn from these data.”

There were about the same amount of adverse events in both groups, with headaches the day after dosing being the most common for the psilocybin group.

As noted above, most patients referred themselves to this study. Many of them expressed a preference for psilocybin, indicating a certain (but not measured) level of expectancy effects. One could also interpret this as a possible indication for ‘disappointment effects when patients found out (guessed) that they were in the escitalopram group. For much more on expectancy and blinding see Muthukumaraswamy and colleagues (2021).

The average depression scores for the patient group was moderate. Other effects might be found for those with severe or treatment resistant depression (TRD).

Although there was no correction for multiple comparisons, in the current format (figure S4), psilocybin compared favorably to escitalopram on all other scales. The measures taken were the following: QIDS-SR-16, HAM-D-17, MADRS, BDI-1A, Avoidance, Anhedonia (inability to feel pleasure), Work and social functioning, flourishing, State-Trait Anxiety Inventory (STAI), Wellbeing, and Suicidality.

The MARDS scores were, on average, 14.4 points lower in the psilocybin group, and 7.2 points lower in the escitalopram group, at the six-week measure. Although there is no direct comparison to be made, the decrease is scores of the psilocybin group is quite similar to that of the earlier studies with escitalopram (12 points drop) mentioned above. (note: we couldn’t immediately find the baseline MARDS scores, which if they are lower than in the other studies could explain this in part)

This study provides evidence for parity between a very good antidepressant and psilocybin. A phase 3 trial can be informed by the data here and could possibly show that psilocybin is more effective than antidepressants.

The study does leave one with several questions, of which we hope to have some answered:

Trial of Psilocybin versus Escitalopram for Depression

Rosalind Watts
Rosalind Watts is a clinical psychologist and clinical lead at the Psychedelics Research Group at Imperial College London. She is also known for developing the 'Accept, Connect, Embody' psychedelic therapy model.

David Nutt
David John Nutt is a great advocate for looking at drugs and their harm objectively and scientifically. This got him dismissed as ACMD (Advisory Council on the Misuse of Drugs) chairman.

David Erritzoe
David Erritzoe is the clinical director of the Centre for Psychedelic Research at Imperial College London. His work focuses on brain imaging (PET/(f)MRI).

Therapeutic Alliance and Rapport Modulate Responses to Psilocybin Assisted Therapy for Depression
This trial (n=59) assessed the relationships between therapeutic alliance and rapport, the quality of the acute psychedelic experience and treatment outcomes. Following psilocybin administration at a second session, the therapeutic alliance had a direct impact on final depression scores, not mediated by the acute experience, with a weaker alliance ahead of the second psilocybin session predicting higher absolute depression scores at the endpoint.

Psilocybin vs Escitalopram for Major Depressive Disorder: Comparative Mechanisms
This is a randomised double-blind clinical trial. The aim is to compare the efficacy and mechanisms of action of psilocybin, the primary psychoactive substance in 'magic mushrooms', with the SSRI (selective serotonin reuptake inhibitor) escitalopram for major depressive disorder (MDD).

PDF of Trial of Psilocybin versus Escitalopram for Depression

Trial of Psilocybin versus Escitalopram for Depression