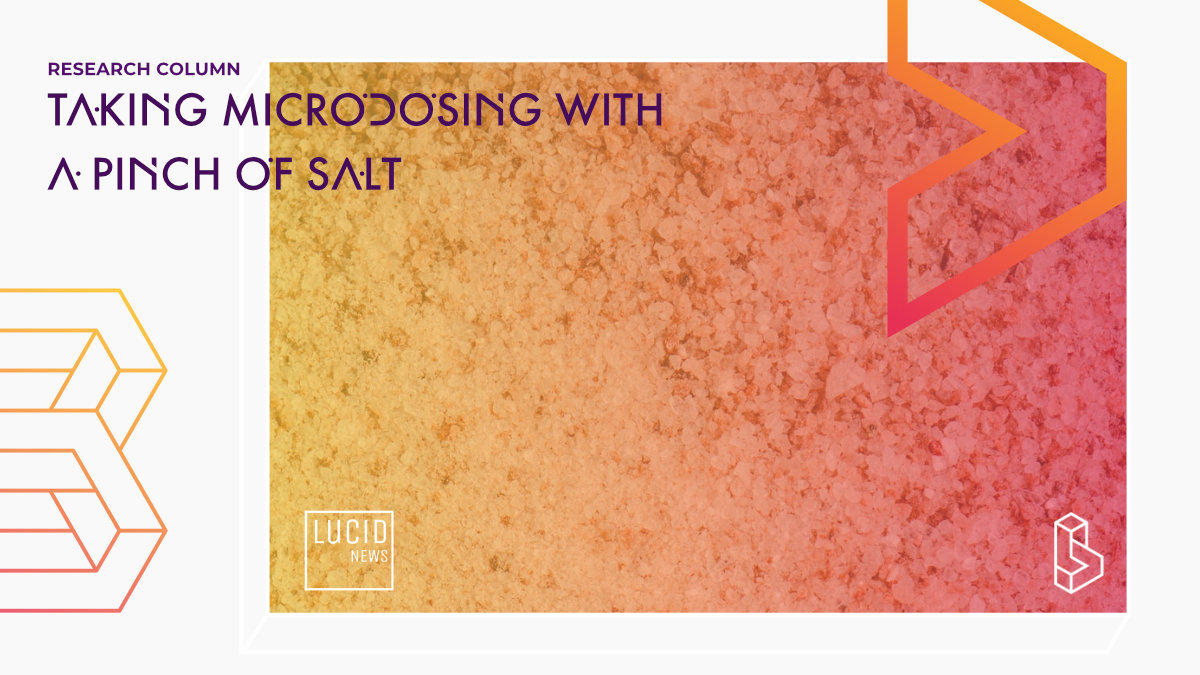 This column was written by Blossom’s founder Floris Wolswijk in cooperation, and co-published↗, with Lucid News

Microdosing has become quite the trend. From Silicon Valley programmers to transcendental meditators in Ibiza, many people seem to be taking a pinch of psychedelic. But while anecdotes abound praising the benefits of taking a small, non-perceptible dose of LSD or psilocybin, the science isn’t there yet. At Blossom, we have been tracking all of the peer-reviewed research to date. A new study by Joseph Rootman from the University of British Columbia and colleagues that surveyed over 8,000 participants was recently released with the hope of providing more clarity.

The study surveyed the microdosing practices, motivations, and mental health history of self-selected microdosers and non-microdosers via a mobile phone application. The app, Quantified Citizen, was specifically designed to gather data on cognitive performance and mental health. The company behind the app, Quantified Citizen Technologies, also helped fund the study. Rootman and three other co-authors are intimately involved as scientific advisor, CEO, CTO, and investor.

Most notable of the co-authors is Paul Stamets, a minority investor in Quantified Citizen Technologies, and possibly the most knowledgeable person in the world on fungi. He is also the founder of Fungi Perfecti, a company that sells north of ten of million worth of fungi products each year. In addition, Stamets has a patent pending on the combination of psilocybin microdoses, Lion’s Mane, and niacin, something we will come back to shortly.

Rootman and his co-authors wanted to know if those who microdosed were experiencing positive effects. The data from the study is correlational, meaning that the participants were only observed, and asked if they were microdosing or not. No specific intervention was done such as asking a random half of the group to either microdose or abstain.

The strength of Rootman’s study lies in the extremely large sample size. To date, there have been seven lab studies, varying from 20 to 50 participants, that haven’t observed significant changes in mood. Most of the lab-based studies were double-blind studies, meaning that both the researchers and participants didn’t know who had received the microdose. For instance, last year Nadia Hutten and colleagues from Maastricht University found small changes in mood and anxiety. At the same time, they also showed that at the higher end of the microdose (20µg) participants were very aware of the drug effects.

Rootman’s study includes over 4000 people who did microdose and 4000 who were not currently microdosing. One possible reason for the lack of findings in lab-based studies, where participants stay in a university room for the whole duration of the experiment, could be the small sample size. With so few participants, a small but meaningful effect of microdosing may not be visible in the data. Not being able to implement the possible benefits of microdosing in daily life, but being confined to a lab may also not have been conducive to finding positive effects.

Another issue with studies in the lab is that they have usually been done with healthy participants, those who may have the least to gain from microdosing. Starting with healthy participants, minimizing risks and not introducing new variables into the study is common practice in research. These are possibly also not the participants that are expecting a microdose to do as much as others who microdose with a specific intention. Still, when looking at the brain changes as Conor Murray and colleagues at the University of Chicago did, they found similar, yet smaller, changes in brain patterns as those observed in subjects who had taken a full dose of LSD.

To put Rootman’s study into context further, a total of 3600 people have participated in other survey studies that have found similar positive effects on mood, creativity, and productivity. The largest of these survey studies was conducted by microdosing evangelists James Fadiman and Sophia Korb two years ago. More than a thousand participants reported on their emotional state through the use of a checklist and written diary entries. Participants reported improvements in mood, more energy, and healthy habits.

Speaking at a conference on ‘the remarkable results of microdosing,’ Fadiman says: “The problem with all that [lab-based] research is that they were looking only for what we would call classic psychedelic effects, so they missed everything else. But being good scientists, they said there are no effects rather than, here are the things we looked for and there weren’t those that would have been a little more correct.”

An imaginative study by Balázs Szigeti and colleagues from Imperial College London earlier this year was able to bridge the gap between the lab and the everyday practice of microdosing. About 200 participants prepared a microdose or placebo for themselves and through an ingenious system of QR codes, self-blinded themselves and took a microdose for half of the duration of the study.

Just like in Rootman’s study, their mood, creativity, and energy levels went up. But there is a twist: at the moments where the participants were taking a placebo capsule, similar positive effects were reported. In other words, the researchers of that study, which Rootman doesn’t cite (though it was published right after the first draft of his study was submitted), find that expectancy effects may play a large role in the effects of microdosing.

Shouldn’t Rootman’s paper should mention this? Fellow researcher Eduardo Schenberg thinks so, stating: “New psychedelic microdosing paper with zero occurrences of the words “placebo” and “expectancy”, while highlighting the practice of “stacking” for which at least one author has pending patents.”

Expectancy effects, also known as placebo effects, can be one of the explaining factors behind the lower level of negative mood among those who were microdosing. In short, if people expect a medicine (or in this case a microdose) to have a certain effect, this expectation in itself can lead to more positive ratings on mood. The Rootman study fails to mention the possibility that the placebo effect could be in play here.

Maybe even more troubling is the slicing of data that has been done to come to the conclusion that is being presented. First, the authors asked participants to self-report whether they had concerns about their mental health, which those who microdosed reported more of (32% microdosers compared to 27% non-microdosers). Then, those who reported having mental health concerns received a set of follow-up questions about “specific mental health issues and substance abuse categories.” Those who microdosed reported fewer problems than those who didn’t.

Next to the expectancy effect, another big factor here is that those who microdosed may have been more conscious of their mental health, so a larger proportion (32%) answered the follow-up questions, including those with fewer problems.

This nuance can easily get lost in popular science reporting. Just take Joseph Guzman’s piece for The Hill, stating “A study recently published in Nature: Scientific Reports found the use of small doses of psychedelics resulted in a reduction of anxiety and depression symptoms among participants.” Takes like this are not unexpected but are wrong. It can’t be overstated that observing two groups doesn’t allow for any causal conclusions to be drawn.

Unfortunately, this is not where the problems with the Rootman study end. Throughout the article, there is scant mention of “stacking,” or the consumption of various other substances to possibly enhance the microdosing experience. Specifically mentioned are Lion’s Mane (a non-psychoactive mushroom) and niacin, the combination on which Stamets has a patent-pending. Interestingly, no microdosing study before this one has mentioned the practice of stacking, which was done by more than half of the participants, with 16% doing the specific above-mentioned “stack.”

Taking a step back from the actual paper, we can see that there may be a clear motivation by the researchers to present microdosing in a positive light. Or as Robin Carhart-Harris stated the day this paper was published: “Are we starting to see market-driven spin masquerading as science in psychedelic research publications?” Stamets’ company Fungi Perfect would benefit greatly from the positive press and supposed scientific backing his “stack” gets.

What can this study tell us? Alas not much at this time. Because people self-selected if they wanted to microdose; the data was sliced so that only those who self-reported mental health issues were given a follow-up questionnaire; and data wasn’t collected over time, this large study isn’t able to answer the question of whether microdosing does indeed help improve mental health. A more rigorous large-scale study is currently still necessary.

If you’re currently microdosing, should you stop? No, absence of evidence isn’t evidence of absence. The financial costs of microdosing are low, and there haven’t been credible indications of long-term harm. But don’t expect a pinch of psychedelic to change your world without you having to put in the work. As with a high dose of psychedelics, a microdose may be a catalyst that starts you on the right path. In time we will know if a sub-perceptual dose has an outside impact, but not today.