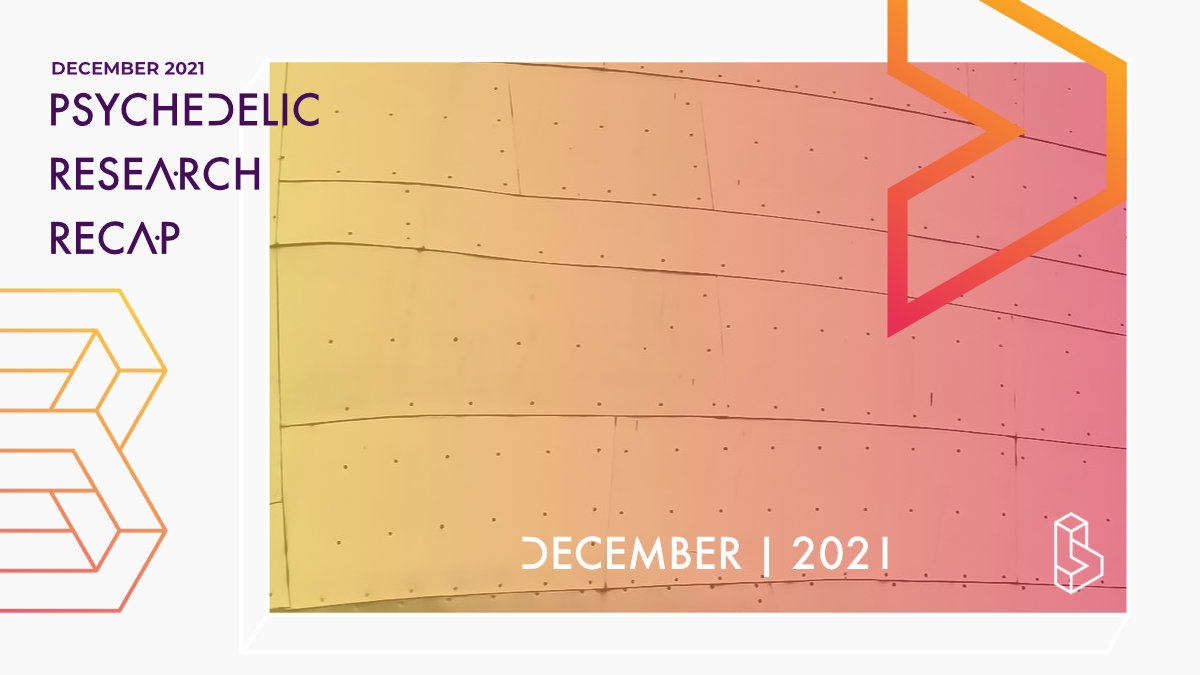 December was another busy month in the world of psychedelic research as 2021 came to a close. The benefits of microdosing remain in dispute, the use of virtuality reality in tandem with psychedelics is further discussed, while we simultaneously gained further insight as to how different psychedelics work in the brain for different disorders, through both experiments and reviews.

One of the most interesting studies this month was the publication of the crystallographic structure of various pharmaceutical psilocybin polymorphs which puts patents in jeopardy. Additionally, in the essence of Open Science, we now have a step-by-step process to synthesize pharmaceutical-grade MDMA without the need for highly controlled precursor chemicals.

You can find all the papers in our database, and the ones that weren’t added in our December Link Overview.

The microdosing debate rages on

As we edged toward the end of 2021, microdosing was the hot topic within the psychedelic community. The jury is still out on whether or not the science supports the overwhelmingly positive anecdotal reports from microdosers. A number of studies with some interesting results shed further light on this issue.

In one study, a double-blind placebo-controlled protocol was used to assess the effects of microdosing psilocybin (0.5g dried mushrooms, about 0.9mg psilocybin) on a number of measures. While the overall acute effects induced by the microdose reached significance, the findings were not consistent across participants indicating the results were subjective in nature. The researchers state the role of expectation effects may be, in part, responsible for the anecdotal benefits of microdosing. Interestingly, the EEG results from this were consistent with that of studies involving higher doses of psilocybin.

A similarly designed study showed that psilocybin microdoses (0.7g dried truffles, 15mg psilocybin, about 1/10th a high dose) didn’t alter self-awareness or modulated emotion processing. The confirmatory analysis didn’t show any effects, but the exploratory analysis did show some reduction of depression but only in some participants. Contrary to the aforementioned study, the researchers believed that there were no effects of expectation.

Researchers at Monash University published one of the most comprehensive reviews on microdosing to date. The researchers analysed microdosing studies from 1955-2021, reporting the effects the practice has across categories including mood and mental health, wellbeing and attitude as well as the neurobiological and physiological effects, amongst others. A wide range of biases was found throughout the included studies. Interestingly, the authors argue that the idea that the effects of microdosing are due to expectancy is possibly wrong.

Time for some chemistry

As the psychedelic sector has seen a vast influx of investors and new companies in recent years, the want to create and patent “proprietary formulations” of psychedelic compounds has greatly increased. In the simplest sense, the ability patent comes down to the chemical structures of these supposedly novel psychedelics. In the world of chemical characterization, crystal structures are the gold standard.

A landmark paper revealed the crystal forms of pharmaceutical psilocybin for the first time. Using crystallographic techniques to examine the various crystalline arrangements of psilocybin, known as polymorphs, it was found that three psilocybin polymorphs repeatedly occur from the psilocybin crystallization process and that they have appeared in numerous places throughout the history of synthesizing psilocybin since 1959. These findings have implications for recently awarded patents for supposedly “novel” crystalline psilocybin mixtures.

The implications of the aforementioned findings from the non-profit Freedom to Operate have been eloquently explored by prolific psychedelic reporter Shayla Love.

MAPS, another non-profit in the psychedelic sector, provided us with a four-step process for synthesizing up to 5kg of MDMA with fully validated cGMP. MDMA is commonly synthesized with safrole, a highly controlled substance. The presented method uses uncontrolled substances achieving results in excess of 99% purity. Publishing this process in Open Access format increases patients accessibility and the cost-effectiveness of the therapies they need, something which seems to be forgotten by many in an industry which seek to address the global mental health crisis.

Another positive achievement for MDMA this month was the tentative debunking of so-called ‘Blue Mondays’ by Dr. Ben Sessa and his research team. This open-label study assessed the decline in mood and cognition which have been reported following MDMA use. Participants were being treated with MDMA (125mg followed by a 62.5mg dose 2hrs later) for alcohol use disorder (AUD). It was found participants maintained a positive mood during the week following the dosing session and suggests that the ‘come downs’ associated with MDMA may be associated with illicit sourcing of the substance and recreational use.

The science and the experience

A new theory has been put forth as to how psychedelics may act in the brain by researchers at Johns Hopkins. The new model, the cortico-claustro-cortical model (CCC model), proposes that psychedelics disrupt 5-HT2A-mediated network coupling between the claustrum (a region of the brain where 5-HT2A receptors are densely expressed) and the cortex, leading to attenuation of canonical cortical networks. The model is discussed in relation to two previously described models, the CSTC and REBUS.

After administering psilocybin to 28 healthy volunteers (17mg/70kg), using fMRI, it was found that the acute effects of psilocybin may stem from drug-level associated decreases in the occurrence and duration of lateral and medial frontoparietal connectivity motifs in exchange for increases in a uniform connectivity structure.

Researchers at the University of Copenhagen administered 35 medium-high doses (>12mg) of psilocybin to 28 healthy participants whose experiences were assessed at the end of the dosing day using the 30-item Mystical Experience Questionnaire (MEQ) and a qualitative report. Three months after administration, persisting psychological effects attributed to the psilocybin experience were measured using the Persisting Effects Questionnaire (PEQ). It was found that the MEQ total score is positively associated with the later emergence of positive PEQ effects.

The Isness study assessed the experiences of people undergoing a Virtual Reality (VR) journey using the Mystical Experience Questionnaire (MEQ30). ‘Isness’ is a VR experience developed using concepts, methods and analysis strategies from psychedelic research. It was found that Isness participants reported mystical-type experiences comparable to those reported in double-blind clinical studies after high doses of psilocybin and LSD.

A review used the Research Domain Criteria (RDoC) as a template to analyse the multimodal mechanisms underlying the transdiagnostic therapeutic effects of psychedelic therapy, covering molecular, cellular and network levels. This is the first review to use the RDoC to explore psychedelic therapies and may facilitate a precise-personalized psychedelic therapy paradigm.

A meta-analysis assessed the literature regarding the possibilities of using ketamine to treat anxiety disorders. Six RCTs investigating various disorders were included. Ketamine was associated with treatment response for social anxiety disorder but not for PTSD. Doses of >0.5 mg/kg were associated with a greater reduction in scores of anxiety and these anxiolytic effects could be sustained.

Researchers have made the case for using psychedelics to treat chronic pain in this review. Key areas discussed include the potential neuro-restorative effects of psychedelics in pain-related states of consciousness, anti-neuroinflammatory and pro-immunomodulatory actions of psychedelics and the safety, legal, and ethical consideration inherent in psychedelics’ pharmacotherapy, amongst others.

The possibilities of using nitrous oxide (NO2) for treating treatment-resistant depression (TRD) have been put forth. The use of NO2 as a psychiatric intervention is discussed along with its possible mechanism of action. Its antidepressant effects are believed to be mediated through the NMDA receptor.

Outside of the lab

A case has been made for broadening our conceptualization of substance use in order to develop more effective drug policy and education. It is argued that we need to move beyond our current framing of substance use as a pathological issue and that research on recreational drug use would be beneficial.

This month we added 34 psychedelics papers published in December 2021. We also linked to 31 more papers in our December Link Overview. We expect 2022 to be a busy year for psychedelics and are committed to keeping you up to date as the year unfolds.