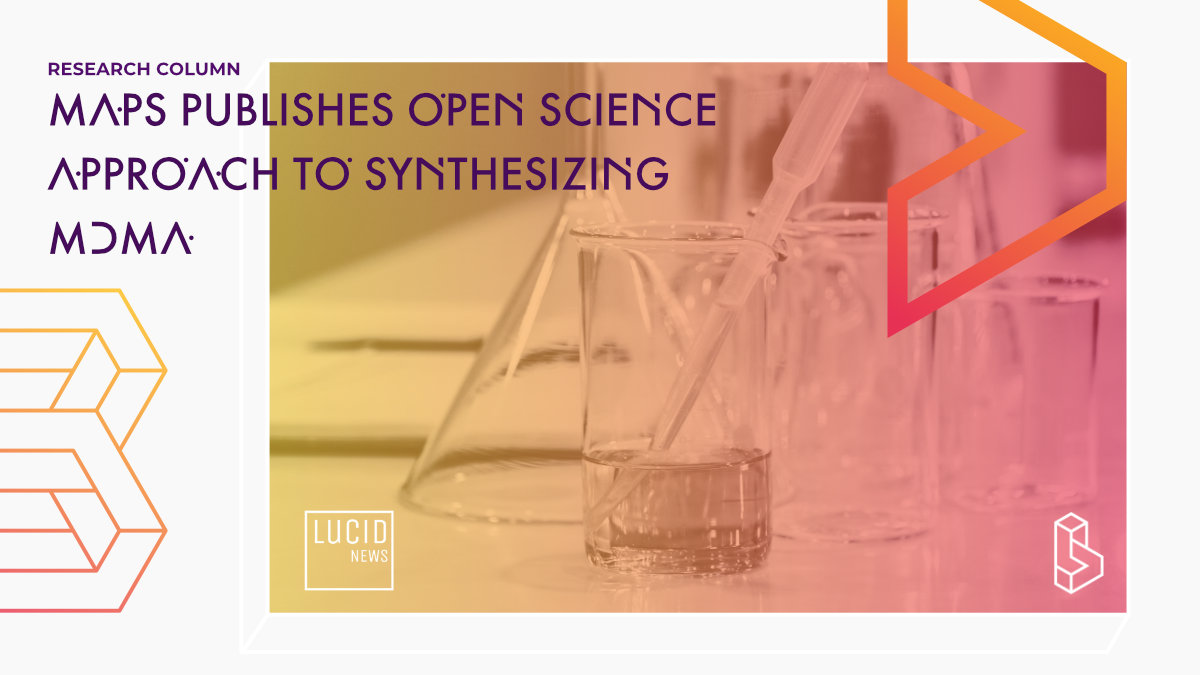 This column was written by Blossom’s founder Floris Wolswijk in cooperation, and co-published↗, with Lucid News

Psychedelics are on their way to becoming legal medicines. MDMA-assisted therapy is on track to be approved by the FDA in 2023. Where will we get these novel medicines from? Therapists cannot simply tap into the underground supply and keep their fingers crossed that the doses are correct. These psychedelics will have to be produced under the right circumstances, and at scale.

A new study by Jay Nair and colleagues from MAPS PBC tries to answer the question of how these substances will be produced. The MAPS PBC study describes a process of making MDMA according to “current Good Manufacturing Processes” (cGMP), with the end product being 30.000 (167mg) individual doses. Read as a step-by-step production recipe, the study maps out how MDMA with a purity of 99.4% can be made from non-controlled substances.

Innovating on the MDMA Synthesis Process

We have known how to make MDMA for over 100 years. It was first synthesized by the German pharmaceutical company Merck in 1912 as a precursor of a substance to stop bleeding (and to evade a patent by a competitor). Since then, chemists have found at least ten different routes to making MDMA from various starting compounds. The two most common starters are safrole and piperonal. Because MDMA is illegal, safrole itself is a controlled substance.

The method used in the MAPS paper describes the four steps that transform 5-bromo-1,3-benzodioxole into MDMA and its hydrochloride salt, MDMA·HCl. The latter is a slight addition to make MDMA more shelf-stable and water-soluble. The former, a starter compound, is a research chemical available at less than 50 cents per gram.

I spoke to Berra Yazar-Klosinski, Chief Science Officer at the wholly-owned MAPS subsidiary, MAPS Public Benefit Corporation and co-author of the MAPS paper. She characterizes their method as follows: “We’re essentially standing on the back of giants, and can do our drug development program because of their efforts. We have taken the methods originally published in PiHKAL by Sasha Shulgin, which were for a small-scale laboratory-grade synthesis and expanded upon it to increase the batch size to 5kg.”

Though described as a four-step process, each step involves multiple actions which need many other materials and ingredients, including magnesium turnings and purified water. The multi-day process also consists of many heatings, coolings, vacuum and mechanical stirring. Do not expect Walter White to be making this before he and Gus Fring build the Superlab.

MDMA is not protected under a patent; as noted before, it’s been around for over 100 years. This leaves two ways for MAPS to ensure that they can produce MDMA with the method described in their paper: protecting the synthesis with a patent or publishing it in a scientific journal.

“Because MAPS PBC follows the Open Science principles, we found it better to publish it and make it available for non-commercial use to the scientific community,” explains Yazar-Klosinski. This way, other researchers will be able to continue building on the shoulders of MAPS to improve the synthesis of MDMA at scale.

In the same spirit of open science, researchers at Usona Institute have published a similar article detailing the cGMP production of psilocybin. In the Usona paper from 2020, researchers describe a scalable process of making psilocybin with a yield of up to 40.000 individual (25mg) doses. Also comparable to the MAPS paper, the method described by Usona starts without controlled substances and yields a considerable amount of doses per batch.

One might think that these scaled-up processes will not only make cGMP grade psychedelics more widely available, but may also reduce costs for the respective institutes. Alas, the synthesis of a psychedelic is not the significant cost in the supply chain. Turning the MDMA into pressed tablets and distributing those to patients, sometimes in other countries, is where most of the expenses lay.

Instead of holding on tightly to trade secrets, these non-profits show that another way of commercializing is possible. The public benefit is maximized in these cases, above the profit per therapy. A spokesperson from Usona shares the sentiment, stating that “publishing our research does not need to be in conflict with a commercial organization’s intentions to seek regulatory approval or protect potential novel inventions.”

This approach does not ignore a business’s traditional needs. By publishing synthesis methods and therapy protocols, MAPS PBC and Usona also hope to encourage others to develop and improve psychedelic-assisted therapies. Similar to Tesla opening up their patents in 2014, they gain to benefit from a growing field where MAPS PBC and Usona are seen as leaders.

Besides the commercial angle, being able to scale up the production of psychedelics allows both MAPS PBC and Usona to supply other researchers with these substances. The knowledge generated from this research will help improve psychedelic-assisted therapies in the long run. For instance, researchers may investigate the interaction between MDMA and a commonly used medication, thus better defining and possibly expanding the scope where MDMA-assisted therapy is applicable.

Usona has provided psilocybin at no cost to eligible academic researchers for the past few years. MAPS is already using MDMA made following the process described in their paper in the ongoing Phase III clinical trial, and is also planning to provide researchers with the same MDMA. Though neither organization will charge for the products, a researcher will still have to bear the regulatory submission costs.

Yazar-Klosinski is not worried about clandestine labs using this synthesis route to make MDMA. “We know clandestine labs are already making MDMA at this scale, maybe even bigger. However, the MDMA that results from this process is of very high purity and adheres to cGMP processes, not something that a clandestine lab would need to worry about,” she says. “So I don’t think it’s going to have an impact on the already existing black market because those labs are already doing things the way they want.”

Making both the method and the resulting cGMP psychedelics available will allow many research projects to flourish. By taking an alternative route to patenting molecules or slightly altered molecules, the attention stays firmly on expanding the scope of psychedelics as medicine.

Synthesizing psychedelics is just the first step in providing them in combination with therapy. Many open questions remain about the legal framework that needs to materialize, who will distribute the medicines, and who will be qualified to provide the treatment. Publications such as the MAPS PBC paper help remove one of the roadblocks on this exciting path forward.