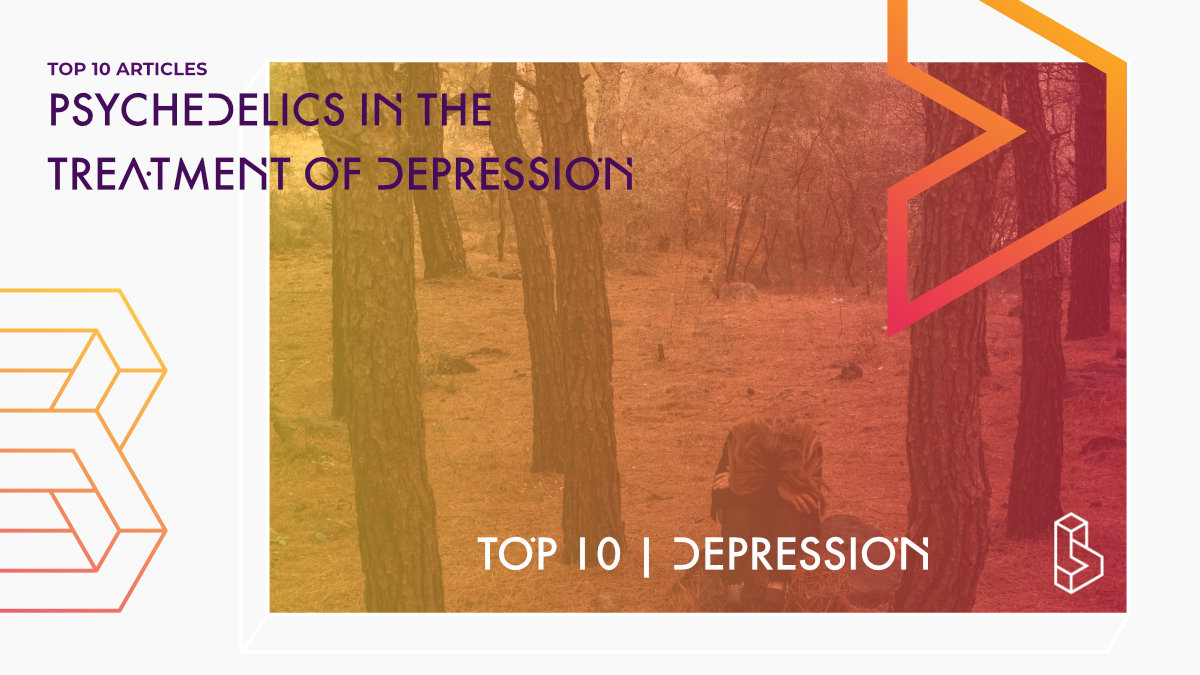 This post was made by Floris Wolswijk in cooperation, and co-published↗, with the MIND Foundation

Depression is a mental disorder characterised by mood disturbances, persistent inability to feel pleasure, and suicidal tendencies. Roughly 264 million people worldwide were affected by depression in 2017. Studies suggest that up to 20% of the members of American society will experience depressive episodes during their lifetime. Anxiety disorders occur parallel to clinical depression in about 50% of the cases.

Mainstream antidepressants have played an important role in alleviating the symptoms in patients suffering from depression. However, their effects are often delayed, unwanted side effects are common, and some patients do not respond to the treatment at all. The socioeconomic costs of depression are high, and many patients relapse after the treatment terminates.

Psychedelics offer a new avenue in the treatment of depression. The studies that we have highlighted show an unmatched potential by any of the current alternatives. Yet, at the same time, we have to remain careful not to declare an early victory.

Although promising, the research presented in this Top 10 has mostly been done with small sample sizes, within carefully designed settings, and therapists with many years of experience. The therapeutic alliance – the relationship between the patient and therapist – and placebo effects are definitely at play. Moreover, psychedelics can’t directly impact the underlying (family, societal, economic) causes of depression.

Considering the above, the following ten publications will summarise the essential studies investigating the potential of psychedelics in the treatment of depression.

Top 10 Psychedelics in the Treatment of Depression Papers Walkthrough

1. Psychedelics in the treatment of unipolar mood disorders

2. Efficacy, tolerability, and safety of serotonergic psychedelics for the management of mood, anxiety, and substance-use disorders

A review (of reviews) by Rafael dos Santos and colleagues covers the major discoveries from the 2010s. The selected studies suggest a high potential of LSD, psilocybin, and ayahuasca in treating depression and anxiety, as well as alcohol and tobacco addictions. The authors discuss the limitations of the analysed studies and discuss possible future improvements in study design.

3. Post-psychedelic reductions in experiential avoidance are associated with decreases in depression severity and suicidal ideation

4. Psychological flexibility mediates the relations between acute psychedelic effects and subjective decreases in depression and anxiety

Another theory was proposed by Alan Davis, Frederick Barrett, and Roland Griffiths. They suggest that increased mental flexibility may be one of the mechanisms playing a role in the improvement of symptoms associated with depression. After surveying almost 1000 users of psychedelics, the researchers found that ‘Psychological flexibility mediates the relations between acute psychedelic effects and subjective decreases in depression and anxiety’ (2020). In other words, the psychological insight and the occurrence of mystical experience during a psychedelic experience lead to an increase in psychological flexibility associated with decreases in depression and anxiety symptoms.

The same research group at the Johns Hopkins Center for Psychedelic and Consciousness assessed the effects of psilocybin administration on 24 participants with major depressive disorder (MDD). The patients showed a clinically significant response to the intervention at week one and week four post-treatment. Although limitations were unavoidable, these results add to the mounting evidence of the large, rapid, and sustained effects of psilocybin in the treatment of MDD.

Leor Roseman, David Nutt, and Robin Carhart-Harris (2017) investigated the aspects of the psychedelic experience which may potentially be the key mediators of long-term improvements in mental health. In their article titled ‘Quality of acute psychedelic experience predicts therapeutic efficacy of psilocybin for treatment-resistant depression’ they suggest that the extent of oceanic boundlessness experience was the main predictor of the positive outcomes. The one aspect which turned out to be entirely unrelated to the clinical outcome was the level of visual imagery the participants saw during their psychedelic experience. These results mean that, in contrast to mainstream antidepressants, “the therapeutic effects of psilocybin are not a simple product of isolated pharmacological action but rather are experience-dependent”.

Studying the promising paradigm of psilocybin-assisted therapy for treatment-resistant depressive patients has been done by Robin Carhart-Harris et al. (2018). In ‘Psilocybin with psychological support for treatment-resistant depression: six-month follow-up‘, they looked at how 20 participants fared after two sessions with a moderate (10mg) and high dose (25mg) of psilocybin. The treatment was generally well tolerated by the patients, and there were no serious adverse events. The data suggested that the suicidality scores were significantly reduced, and the maximal effects were observed at five weeks post-treatment. The study also highlighted the importance of psychological support before, during, and after the psilocybin administration session.

A functional magnetic resonance imaging (fMRI) study by Robin Carhart-Harris et al. (2017) investigated the neurological basis of the response to psychedelics. The study looked at whole-brain cerebral blood flow (CBF) post-treatment with psilocybin. The data showed decreases in several areas of temporal and frontal lobes and a relation between decreased CBF and the reduction in depressive symptoms was found. The results suggest that “the changes in brain activity observed just one day after a high dose psychedelic experience are very different to those found during the acute psychedelic state”. Additionally, the authors observed an increased resting-state functional connectivity within the default-mode network (DMN) post-treatment, which is consistent with previous findings suggesting that DMN integrity changes are associated with mood improvements.

9. Therapeutic mechanisms of psilocybin: Changes in amygdala and prefrontal functional connectivity during emotional processing after psilocybin for treatment-resistant depression

Lea Mertens et al. (2020) investigated the functional connectivity between the amygdala, which is a brain structure involved in the expression of fear and which was also found to be active in the previous study, and the ventromedial prefrontal cortex, which is involved in social decision making, of 19 research participants during a face-processing task (versus a resting phase) before and after treatment with psilocybin. ‘Therapeutic mechanisms of psilocybin: Changes in amygdala and prefrontal functional connectivity during emotional processing after psilocybin for treatment-resistant depression’ suggests that the activity of neural pathways involved in emotional responsiveness is increased after a high dose of psilocybin. It was further hypothesised that the proposed functional connectivity changes in the amygdala and the ventromedial prefrontal cortex would relate to improvements in depression and anxiety.

10. Rapid antidepressant effects of the psychedelic ayahuasca in treatment-resistant depression

Another alternative to classic antidepressants might be offered by ayahuasca – a botanical hallucinogen used in ritual and medicinal context by the native tribes of the Amazon. The ‘Rapid antidepressant effects of the psychedelic ayahuasca in treatment-resistant depression’ (2019) double-blind placebo-controlled study shows that also ayahuasca has the potential to improve the scores in the Depression Rating Scale significantly. The authors showed that at one day and at seven days post-treatment with ayahuasca, MARDS scores of depression (but not remission rates) were significantly lower. The Banisteropsis caapi brew has been found to produce a rapid antidepressant effect compared to placebo and offer high safety and tolerability profile.

Bonus Article: Although not exclusively focusing on depression, Joost Breeksema et al. (2020) reviewed the qualitative experiences of patients in the treatment of mental health disorders. In ‘Psychedelic Treatments for Psychiatric Disorders: A Systematic Review and Thematic Synthesis of Patient Experiences in Qualitative Studies’, the group searched for patterns among patients’ experiences, considering both the experiences across disorders and the therapeutic processes together with the insights they offered. Patients frequently reported the advantages of psychedelic-assisted therapy over mainstream approaches, emphasising the positive role of trust, safety, attention, and even the presence of music. The study also found that psychedelics exhibit overlapping therapeutic effects across diseases, including introspective insights and the feeling of connectedness. The authors conclude that the understanding of factors coming into play during a therapy session “may contribute to optimising treatment context, and lead to improved clinical responses and personal benefits.”