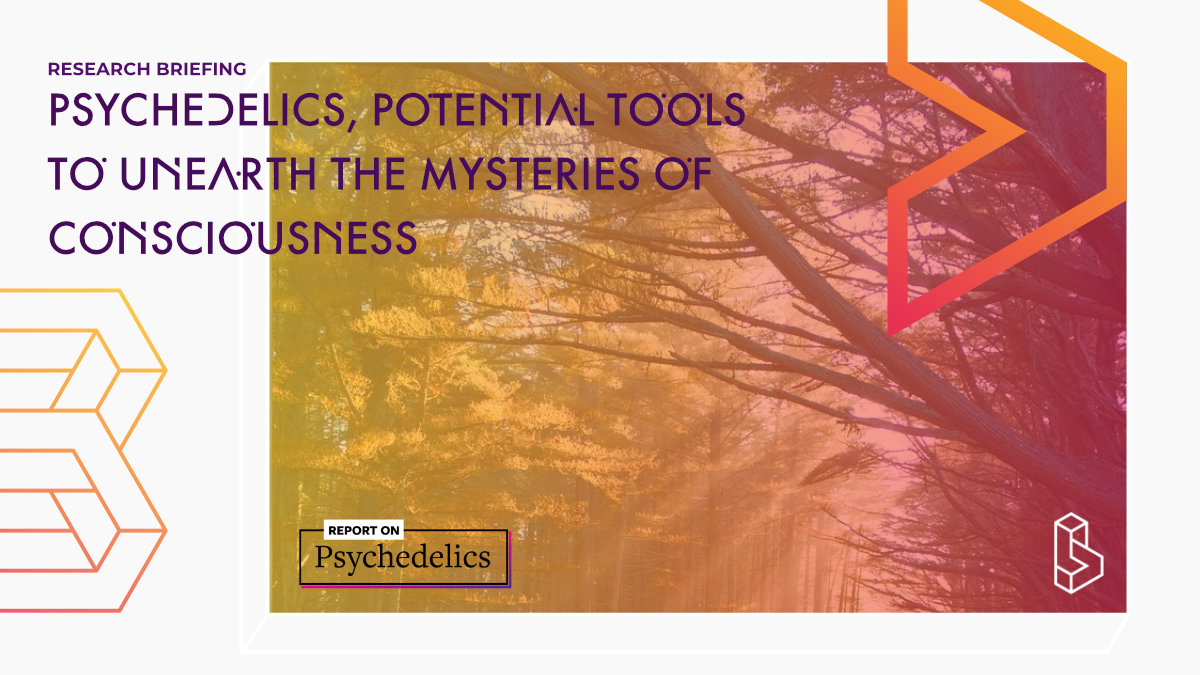 This research briefing is co-published with the excellent Report on Psychedelics (RoP).

In the Research Briefing

Psychedelics are poised to be the next big thing in psychiatry. These psychoactive substances are showing great promise in alleviating the symptoms of mental health disorders such as depression, anxiety and PTSD. In addition to their direct therapeutic potential, these substances may offer unique insights into the mysterious nature of consciousness given the profound effects they elicit once consumed. Studies have shown that the subjective nature of psychedelic experiences can elicit belief changes which could, in turn, shape beliefs about consciousness. However, empirical data on the relationship between psychedelics and consciousness is lacking.

The present survey study (n=1,606) from researchers at Johns Hopkins sought to explore whether psychedelics change the attribution of consciousness to a range of living and non-living entities. Participants answered questions based on a single experience with one of several classic psychedelic substances (e.g., psilocybin, LSD, ayahuasca, mescaline). To assess participants’ beliefs in the capacity of conscious awareness of various living and non-living entities, a series of 9 items were devised and completed as part of the survey. Additionally, participants completed the 30-item Mystical Experience Questionaire (MEQ) as well as questions relating to their belief in free will and their superstitious beliefs.

While much remains a mystery, this study shows that a single psychedelic experience can lead to increases in attributions of consciousness that can last for years. Given the retrospective nature of the study, studies that include psychedelic administration and controls are needed to provide further insight into the relationship psychedelics have with consciousness.

Psilocybin influences the creative process, a look at the brainwaves

Psychedelics and creativity have been intertwined since these psychoactive substances first emerged into society in the 1950s and 1960s. From musicians to artists and even figureheads in the tech industry reportedly using psychedelics, these substances are believed to have the ability to enhance the creative process. While anecdotal reports offer some evidence for such effects, rigorous scientific studies assessing the influence psychedelics have on creativity and the underlying neural mechanism are scarce.

In the present paper, researchers at Maastricht University sought to address this knowledge gap by exploring the effects of psilocybin (0.17 mg/kg) on measures of creative thinking while simultaneously assessing the biological predictors underlying these effects using a double-blind placebo-controlled design. To measure divergent (DT) and convergent thinking (CT), participants (n=60) completed both the Alternate Uses Test (AUT) and the Picture Concept Test (PCT). Functional MRI (fMRI) was used to assess connectivity in the brain while Magnetic Resonance Spectroscopy (MRS) was used to assess glutamate concentrations in specific brain areas. Participants performed creative tasks on the testing day as well as at 7-day post-testing.

Overall, the findings of this study suggest that psychedelics may be an important tool to investigate the creative process. Additionally, the authors suggest that the ability of psilocybin to acutely decrease CT and increase spontaneous DT, while subacutely enhancing more goal-directed DT, could aid in the therapeutic process by opening up a window of opportunity where therapeutic interventions could prove more effective.

The ability of psychedelic drugs to facilitate a mystical-type experience was initially studied during the first era of psychedelic research and has since been well-established. In what is now one of the most cited papers in psychedelic research, Roland Griffiths and colleagues (2006) reported that psilocybin can occasion mystical-type experiences that have substantial and sustained personal meaning and spiritual significance. Further research has pointed toward psychedelic-induced mystical experiences having positive effects on therapeutic outcomes in clinical trials.

In the present paper, Sam Gandy explores factors that contribute to the occurrence and intensity of mystical experiences and enhance their long-term benefits. Maximizing the likelihood of such experiences could be an important factor in the beneficial effects of psychedelics.

The present paper offers food for thought on the psychedelic induced mystical experiences and how they may be mediated to enhance therapeutic outcomes. Further research should more thoroughly investigate the various factors that are believed to predict such experiences. Overall, mystical experiences catalysed by psychedelics are considered an important predictor of long-term benefits in healthy and clinical populations much work remains to be done to examine how to maximise their occurrence and any potential benefits.

Julia Lebrero-Tatay and colleagues performed a bibliometric review of 15 psychoactive drugs from 1960 to 2018 (956,703 publications). Results show heterogeneous patterns of growth for the publications of the selected psychoactive drugs. Unexpected regional differences in the scientific output about the selected drugs were found, which might be explained by cultural and political phenomena.

In this paper, David Nichols discusses how he coined the term ‘entactogen’ for the pharmacological class of drugs that includes MDMA and other substances with similar psychopharmacological effects. Nichols details the chemistry underlying entactogens and how they differ from classical psychedelics such as psilocybin and LSD as well as how the effects of MDMA differ from these psychedelics.

In the lab, a trial assessed the effects of LSD on a number of receptors in the brain including the 5HT1a, 5HT1b, 5HT2a, D1 and D2 receptors. LSD produced differences in functional connectivity when the analysis was enriched with each of the primary serotonergic and dopaminergic receptors, the system of which were associated with perceptual effects and perceived selfhood as well as cognition respectively.

Researchers conducted interviews to shed light on how people use magic mushrooms, what they perceive the effects of such use to be, and the meanings that users attach to their magic mushroom experiences. Participants also describe the strategies they use to maximise their experiences.

A case is made for using Compassion Focused Therapy (CFT) in tandem with psilocybin for the treatment of depression.