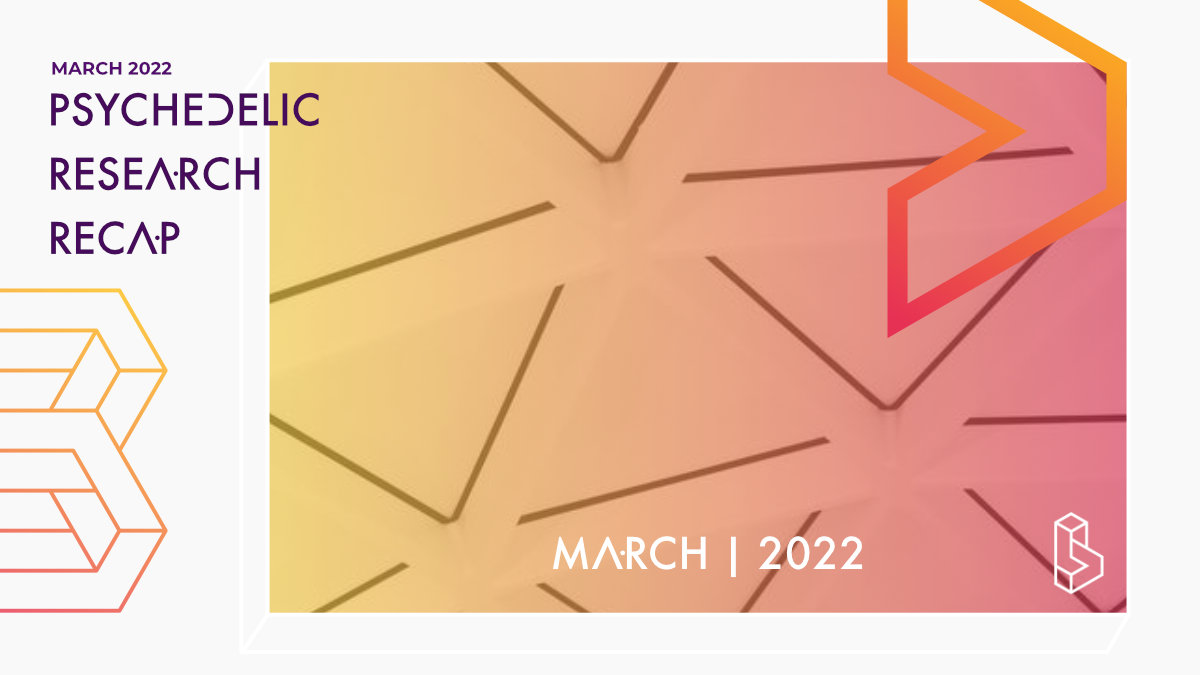 As the first quarter of 2022 has come to an end, we continue to discover more about psychedelics and their therapeutic potential. March was another busy month for psychedelic research with notable publications including a direct comparison of the effects elicited by psilocybin and LSD, escalating doses of LSD were safely administered in a novel intervention paradigm, while MDMA was shown to reduce eating disorder symptoms in patients with PTSD.

You can find all the papers in our database and those that weren’t added in our March Link Overview.

March brought it with the results of various clinical trials as researchers continue to put psychedelics to the test. One of the most significant trials was a head-to-head comparison of the effects of psilocybin and LSD. In a separate study, LSD was found to be safe and well-tolerated when delivered in a streamlined version of psychedelic-assisted therapy, which could be more cost-effective for both patients and healthcare providers.

Led by Matthias Liechti, the team at the University of Basel compared the effects of psilocybin (15 & 30mg) and LSD (100 & 200µg) to placebo in healthy volunteers. Surprisingly the trial found that both doses of LSD and the high dose of psilocybin produced qualitatively and quantitatively very similar subjective effects, indicating that alterations of mind induced by LSD and psilocybin do not differ beyond the effect duration. The researchers concluded that any differences between LSD and psilocybin are dose-dependent rather than substance-dependent.

Using both an open-label and double-blind placebo-controlled design, researchers in this trial assessed the safety, tolerability, pharmacokinetics, and subjective effects of varying doses of LSD. Participants (n=32) received 50 (n = 3), 75 (n = 7), 100 (n = 3) LSDµg followed by 75 µg LSD (n = 9) 1 week apart, or a placebo followed by a 75 µg LSD (n = 10) one week apart. This Eleusis sponsored study used a novel intervention paradigm that was considered to be more scalable than the current PAP treatment protocols. Overall, LSD was found to be safe and well-tolerated within this paradigm.

The same research group conducted interviews with the trial participants to assess participants’ expectations, experiences, and thoughts on the safety and efficacy of the trial. Participants endorsed support for the clinical utility of LSD in controlled environments, expressing the belief that LSD is safe and has the potential to help others.

A study conducted by MAPS (n=90) used the Eating Attitudes Test (EAT-26) to assess the impact MDMA-assisted therapy has on symptoms of eating disorders (ED) in participants with PTSD. There was a significant reduction in total EAT-26 scores in the total group of PTSD participants following MDMA-AT versus placebo (p = .03). Overall, MDMA-AT significantly reduced ED symptoms compared to therapy with placebo among participants with severe PTSD.

In another randomised-controlled trial (n=330), the efficacy of low-dose ketamine (17.5mg/70kg) administered during caesarean section in preventing postpartum depression (PPD) was assessed. No significant differences were found in the prevalence of PPD between the active group and the placebo group at 3 days and 6 weeks after delivery. Pain scores were significantly different at 6 weeks only.

At the University of Maastricht, researchers assessed the effects of psilocybin (12mg/70kg) on measures of creative thinking (n=60). Psilocybin increased ratings of (spontaneous) creative insights while decreasing (deliberate) task-based creativity. Seven days after psilocybin, the number of novel ideas increased. It was found that the acute and persisting effects were predicted by within- and between-network connectivity of the default mode network.

What’s Going On in the Brain?

A trial (n=15) assessed the effects of LSD on a number of receptors in the brain, including the 5HT1a, 5HT1b, 5HT2a, D1 and D2 receptors. Receptor-enriched analysis of functional connectivity by targets (REACT) found that LSD produced differences in functional connectivity. The serotonergic and dopaminergic systems were associated with perceptual effects and perceived selfhood as well as cognition, respectively.

This in vitro study assessed the effect neuroplastic and inflammatory effects of psilocybin. Findings suggest that psilocybin opens a window of plasticity that rapidly normalises while it reduced levels of tumour necrosis factor-alpha (TNF-α) secretion, demonstrating its anti-inflammatory effects.

This paper provides the first account of the interaction between pharmacological and psychological effects in psychedelic-assisted treatment. The paper builds on the previously proposed REBUS hypothesis and the contextual model of Wampold. It is assumed that psychedelics attenuate the precision of high-level predictions, making them more revisable by bottom-up input, and psychotherapy is an important source of such input.

Sam Gandy examines factors that contribute to the occurrence and intensity of mystical experiences and enhance their long-term benefits, including music, meditation and spiritual practices and nature-based settings. The review provides food for thought on these factors and more, and how they might be optimised to increase the chances of a mystical experience occurring.

A bibliometric review of 15 psychoactive drugs from 1960 to 2018 (956,703 publications) finds heterogeneous patterns of growth for the publications of the selected psychoactive drugs. The literature on legal substances and depressants represented between 60% and 80% throughout the years. Additionally, unexpected regional differences in the scientific output about the selected drugs were found, which might be explained by cultural and political phenomena.

The Costs, The Challenges & The Rest

Researchers at MAPS published two separate cost analyses of their Phase III trials using MDMA-assisted therapy (MDMA-AT) to treat PTSD. While MDMA-AT may have cost $11,537 per patient in the trial, the first publication finds that MDMA-AT generates discounted net health care savings of $132.9 million over 30 years when compared to the standard of care for 1,000 patients.

Their second paper uses a decision-analytic model to assess the cost and health benefits of expanded access to MDMA-AT. Expanding access to MDMA-AT to 25-75% of eligible patients was projected to avert 43,618-106,932 deaths and gain 3.3-8.2 million quality-adjusted life-years (QALYs).

There are a number of challenges inherent in clinical trials with psychedelics. In this paper, researchers discuss a number of these challenges, such as the design of individual research studies such as blinding, expectancy, the use of therapy and sources of bias. The broader researcher environment and issues related to evidence, funding and the current scheduling of psychedelics are just some of the other topics discussed.

In this paper, David Nichols discusses how he coined the term ‘entactogen’ for the pharmacological class of drugs that includes MDMA and other substances with similar psychopharmacological effects. Nichols details the chemistry underlying entactogens and how they differ from classical psychedelics such as psilocybin and LSD, and how the effects of MDMA differ from these psychedelics.

This month we added 45 psychedelics papers published in March 2022. We also linked to over 50 more papers in our March Link Overview. With roughly 100 research papers covering various aspects of psychedelics as medicine published in March alone, his movement shows no sign of slowing down any time soon. We at Blossom are committed to making this research accessible and keeping you up to date with all the latest happenings in psychedelic medicine.