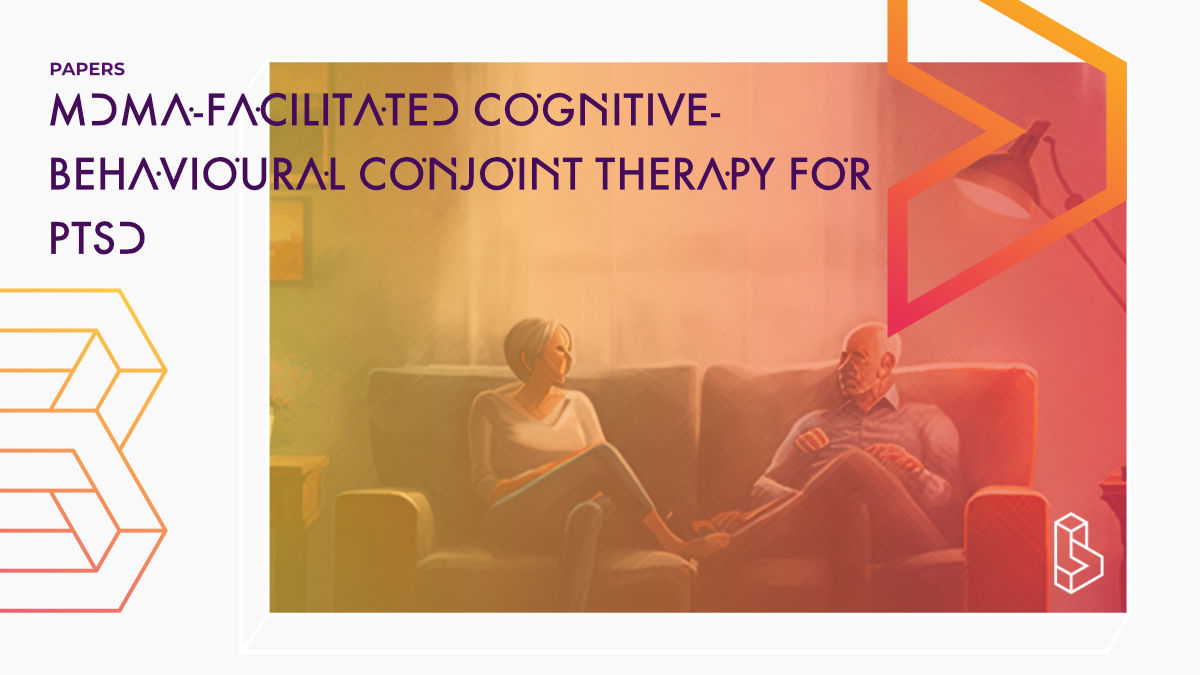 This open-label study (n=12, 6 couples) describes the safety, tolerability, and efficacy of MDMA (75-100mg) in combination with cognitive-behavioural conjoint therapy (CBCT) where one half of the couple was battling with PTSD.

“Cognitive-behavioural conjoint therapy (CBCT) for PTSD has been shown to improve PTSD, relationship adjustment, and the health and well-being of partners. MDMA (3,4-methylenedioxymethamphetamine) has been used to facilitate an individual therapy for PTSD. This study was an initial test of the safety, tolerability, and efficacy of MDMAfacilitated CBCT. Six couples with varying levels of baseline relationship satisfaction in which one partner was diagnosed with PTSD participated in a condensed version of the 15-session CBCT protocol delivered over 7 weeks. There were two sessions in which both members of the couple were administered MDMA. All couples completed the treatment protocol, and there were no serious adverse events in either partner. There were significant improvements in clinician-assessed, patient-rated, and partner-rated PTSD symptoms (pre- to post-treatment/follow-up effect sizes ranged from d = 1.85–3.59), as well as patient depression, sleep, emotion regulation, and trauma-related beliefs. In addition, there were significant improvements in patient and partner-rated relationship adjustment and happiness (d =.64–2.79). These results are contextualized in relation to prior results from individual MDMA-facilitated psychotherapy and CBCT for PTSD alone. MDMA holds promise as a facilitator of CBCT to achieve more robust and broad effects on individual and relational functioning in those with PTSD and their partners.“

This paper is the first recent study on MDMA-assisted psychotherapy for couples. Although this type of therapy has been practised before (1960s, and later underground), no double-blind placebo-controlled studies have been done. This study lays the groundwork for such studies.

“The effect sizes for improvements in PTSD and common co-occurring conditions in this pilot study were greater than those found with individually delivered MDMA-facilitated psychotherapy for PTSD. In addition, the effects on PTSD, other symptoms, and relationship outcomes in this study were on par with, or greater than, those previously achieved with CBCT alone.”

Wagner and colleagues (2021) analysed the secondary measures of this study.

Anne Wagner
Anne Wagner is the Founder of Remedy, a clinical psychologist and treatment development researcher based in Toronto.

Rick Doblin
Rick Doblin Ph.D. is the founder of MAPS. His persistent work since 1986 has been one of the main drivers behind why psychedelics (including MDMA) are now coming back to therapy.

MAPS
MAPS stands for Multidisciplinary Association for Psychedelic Studies, it's the front runner in making psychedelics a legal way to use (and improve) in therapy.

Relational and Growth Outcomes Following Couples Therapy With MDMA for PTSD
This open-label study (n=12, 6 couples) examines the secondary outcomes (up to 6 months later) of Cognitive Behavioral Conjoint Therapy (CBCT) where one partner was suffering from PTSD. There were improvements for both partners on post-traumatic growth, relational support, social intimacy, empathic concern, and less conflict.

MDMA-Assisted Cognitive-Behavioral Conjoint Therapy (CBCT) in Dyads in Which 1 Member Has Chronic PTSD
This Phase 1/2 open-label study will combine methods for conducting MDMA-assisted therapy with methods from the CBCT for PTSD in order to treat 10 participants with chronic PTSD and their partners (intimate or non-intimate significant other who does not have a current diagnosis of PTSD) in order to explore whether combined treatment is effective. Each therapy team will have one therapist trained and experienced in MDMA assisted psychotherapy and one therapist trained and experienced in CBCT.