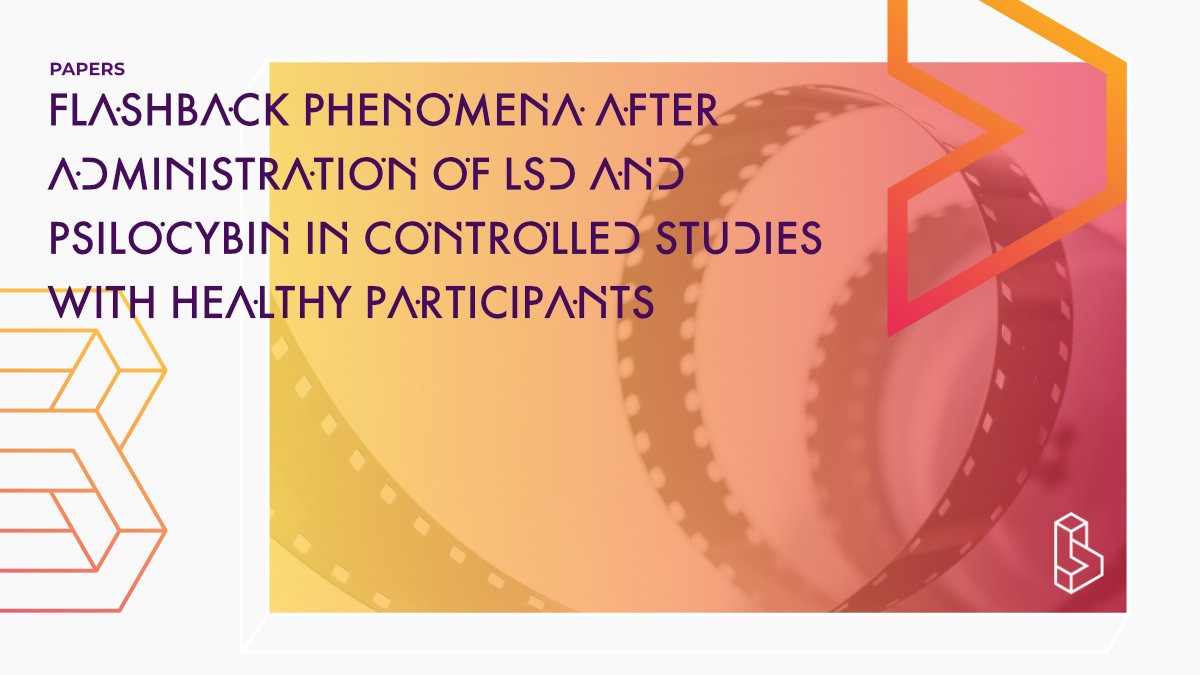 This study analysed data from participants (n=142) in clinical trials who had received LSD and psilocybin to assess the prevalence of recurring drug-like experiences after administration of these substances. 13 participants (9%) reported recurring drug-like experiences (LSD: 7, psilocybin: 2, both: 4) which were considered mild and perceived as neutral to pleasant. No reports met the criteria for hallucinogen-persisting perception disorder (HPPD).

“Background: LSD and psilocybin are increasingly used in phase I trials and evaluated as therapeutic agents for mental disorders. The phenomenon of reoccurring drug-like experiences after the acute substance effects have worn off was described for both substances and especially attributed to LSD. According to the DSM-V, the persisting and distressing manifestation of these experiences is called hallucinogen-persisting perception disorder (HPPD). Data on both conditions is very limited.

Objective: This study aims to provide descriptive data on reoccurring drug-like experiences after the administration of LSD and psilocybin in controlled studies with healthy participants.

Results: Thirteen out of 142 subjects reported reoccurring drug-like experiences (LSD: seven, psilocybin: two, both: four). The reported phenomena were predominantly mild and perceived as neutral to pleasant. Flashbacks were mostly of visual nature, lasted for seconds to minutes, and occurred within a week after the last drug administration. Two subjects reported distressing experiences that subsided spontaneously. One subject reported brief and pleasant visual perception changes which reoccurred for 7 months. None of the subjects reported impairment in their daily lives. None of the cases met DSM-V criteria for HPPD.

Conclusion: Reoccurring drug-like experiences after the administration of LSD and psilocybin are a common phenomenon occurring in up to 9.2% of healthy subjects (7.8% for LSD, 8.3% for psilocybin and 14.3% if both substances are administered). Additionally, our work suggests that flashback phenomena are not a clinically relevant problem in controlled studies with healthy participants.”

Reports of drug-induced flashbacks date back to the first era of psychedelic research in the 1950s and 1960s. At the time, research participants reported the reoccurrence of a psychedelic-like state long after the drug’s effects should have worn off. The risk of flashbacks quickly became commonplace in anti-drug campaigns. Now, as psychedelic research has progressed over the last 50 or so years, we have come to regard psychedelics as physically well-tolerated and non-addictive. However, we now know more about the side effects that accompany psychedelics and that people can experience flashbacks as a result of using psychedelics.

According to the World Health Organization, flashbacks are defined as episodic recurrences of drug effects after the acute pharmacological effects have subsided and are characterized as mostly very transient. Moreover, persisting flashbacks that cause clinically significant distress or impairment have been termed hallucinogen persisting perception disorder (HPPD). Despite the recent resurgence in clinical research with psychedelics, data regarding reoccurring drug-like experiences and HPPD remains limited. If psychedelics are to become widely available treatment options, it is important that we unearth the nature of all possible side effects.

The present study aimed to provide data on the prevalence of reoccurring drug-like experiences in modern clinical research with LSD and psilocybin. Data from six double-blind, randomized, controlled trials were analyzed yielding a total of 142 healthy participants who had received LSD (n=60), LSD, MDMA and d-amphetamine (n=27), LSD and psilocybin (n=31) as well as psilocybin and escitalopram (n=25). All participants were asked at the end-of-study visit, on average of 40 days from their last study session, if they had experienced any recurring drug effects since beginning the trial.

The present study is one of the first to thoroughly analyse modern clinical research with psychedelics to assess the prevalence of recurring drug-like experiences and HPPD. The results show that these phenomena are relatively common in clinical trials with healthy participants although they tend to be experienced as benign, having little impact on daily life.

The authors do acknowledge limitations to their work including the relatively small sample size as well as the different screening criteria, dosing regimens and substances administered across the studies. Nonetheless, the findings suggest that flashbacks are not a clinically relevant problem in controlled studies with healthy participants.

Matthias Liechti
Matthias Emanuel Liechti is the research group leader at the Liechti Lab at the University of Basel.

Felix Müller
Felix Müller is a researcher at the University of Basel. He is leading the research project on psychedelics at the Department of Psychiatry.