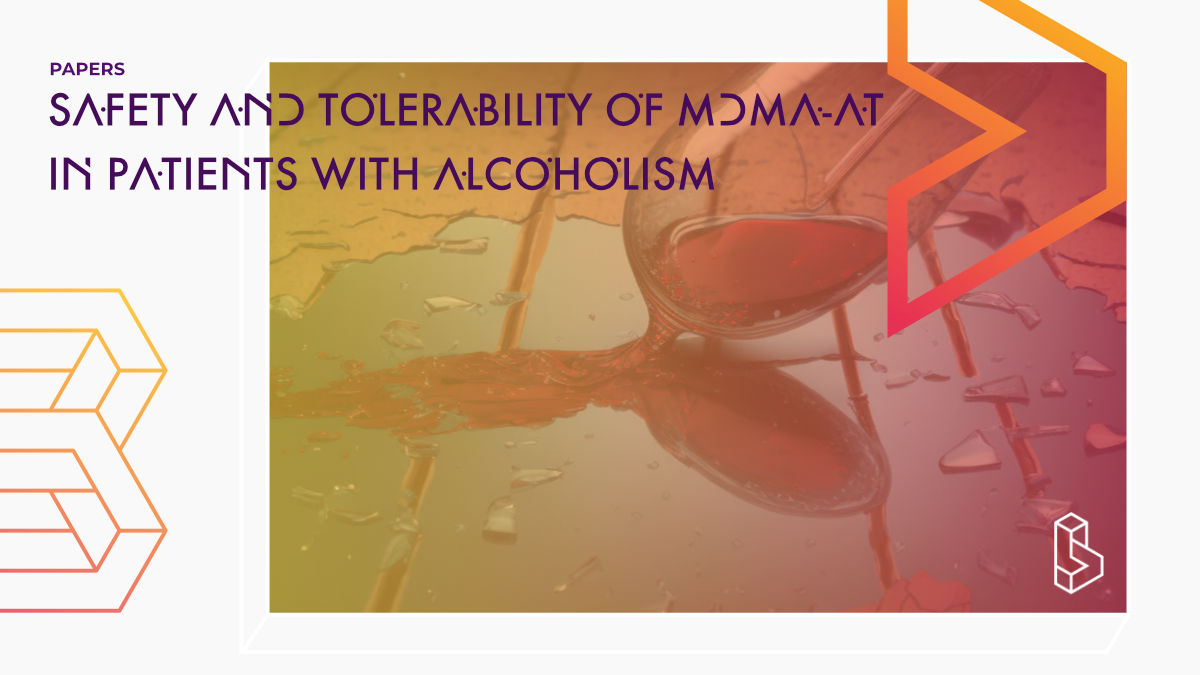 This open-label study (n=14) with MDMA-assisted psychotherapy (2 sessions;187.5mg) found it well-tolerated and safe to use. The average consumption of alcohol nine months later was 18.7 units, versus 130.6 units before the detox (start of the study).

“Background: 3,4-methylenedioxymethamphetamine (MDMA) therapy has qualities that make it potentially well suited for patients with addictions, but this has never been explored in a research study. We present data from the Bristol Imperial MDMA in Alcoholism (BIMA) study. This is the first MDMA addiction study, an open-label safety and tolerability proof-of-concept study investigating the potential role for MDMA therapy in treating patients with alcohol use disorder (AUD).

Aims: This study aimed to assess if MDMA-assisted psychotherapy can be delivered safely and can be tolerated by patients with AUD post detoxification. Outcomes regarding drinking behaviour, quality of life and psychosocial functioning were evaluated.

Methods: Fourteen patients with AUD completed a community alcohol detoxification and received an eight-week course of recovery-based therapy. Participants received two sessions with MDMA (187.5mg each session). Psychological support was provided before, during and after each session. Safety and tolerability were assessed alongside psychological and physiological outcome measures. Alcohol use behaviour, mental well-being and functioning data were collected for nine months after alcohol detoxification.

Results: MDMA treatment was well tolerated by all participants. No unexpected adverse events were observed. Psychosocial functioning improved across the cohort. Regarding alcohol use, at nine months post detox, the average units of alcohol consumption by participants was 18.7 units per week compared to 130.6 units per week before the detox. This compares favourably to a previous observational study (the ‘Outcomes’ study) by the same team with a similar population of people with AUD.

Conclusions: This study provides preliminary support for the safety and tolerability of a novel intervention for AUD post detox. Further trials to examine better the therapeutic potential of this approach are now indicated.”

The participants in the study underwent a 7-10 days detox, followed by 8 weeks (10 sessions) of psychotherapy where in weeks 3 and 6, an additional session with MDMA was given (125mg + 62,5mg booster). The normal therapy sessions lasted one-hour, the ones with MDMA 6-8 hours.

The primary measures of the study were the completion of the therapy program, participants accepting the booster dose, and adverse events. Secondary measures were the changes in drinking behavior, mental well-being, psychosocial functioning, quality of life, and drug use after therapy.

The participants in the study were all diagnosed with alcohol use disorder (AUD) and were motivated to seek help and participated in detoxification. A majority used medications (e.g. SSRIs) which were gradually reduced and stopped before the therapy sessions.

After the initial eight weeks, the participants did a follow-up at three, six, and nine months (after the start of the study).

The study was completed by 13 participants. One participant dropped out after the first MDMA-assisted session due to personal circumstances. Another patient didn’t receive the first booster because of forgetting to take her hypertension medications. There were no other significant or unexpected physiological/adverse events.

Interestingly, this study found no negative effects on mood that is experienced by part of the recreational users. This bodes well for using MDMA in a clinic and helps alleviate some fears around relapses or negative moods a few days later.

The participants experienced lower anxiety and depression scores after the therapy sessions, which held up to the end-point. Note: at the six month data collection, only six results were measured.

In the discussion, the paper is compared to a group of participants in another study (Sessa et al., 2020) that also underwent detoxification but received no therapy after the detoxification. Within three months, 8 out of the 12 participants in that study had relapsed to drinking (75% instead of 21%, or 75% vs 36% at 6 months).

The current study is compared to that study, but the graph included in the paper does give the suggestion that the other study also included therapy.

This paper opens the door for future studies of MDMA-assisted psychotherapy for alcohol use disorder (AUD) or addiction in general. Although double-blind studies are needed, one hopes that the expected approval of MDMA for PTSD, will help fast-track the research and (if results warrant it) approval of this therapeutic model.

“A logical next step would be to carry out a placebo-controlled randomised controlled trial in which the level of therapist contact is consistent between conditions. This would enable any between-group differences in clinical outcomes to be attributed to MDMA rather than to the psychological support provided.“

This study was also reported on in The Times.

First study of safety and tolerability of 3,4-methylenedioxymethamphetamine-assisted psychotherapy in patients with alcohol use disorder

David Nutt
David John Nutt is a great advocate for looking at drugs and their harm objectively and scientifically. This got him dismissed as ACMD (Advisory Council on the Misuse of Drugs) chairman.

Percentage of Heavy Drinking Days Following Psilocybin-Assisted Psychotherapy vs Placebo in the Treatment of Adult Patients With Alcohol Use Disorder
This double-blind, active placebo-controlled study (n=95) finds that psilocybin (2x, 25-40mg/70kg) significantly reduced the number of heavy drinking days (10% versus 24% in the placebo group) in the 32-week follow-up period. The trial is the first to test psilocybin for alcoholism (alcohol use disorder, AUD) in a double-blind study.

First study of safety and tolerability of 3,4-methylenedioxymethamphetamine-assisted psychotherapy in patients with alcohol use disorder