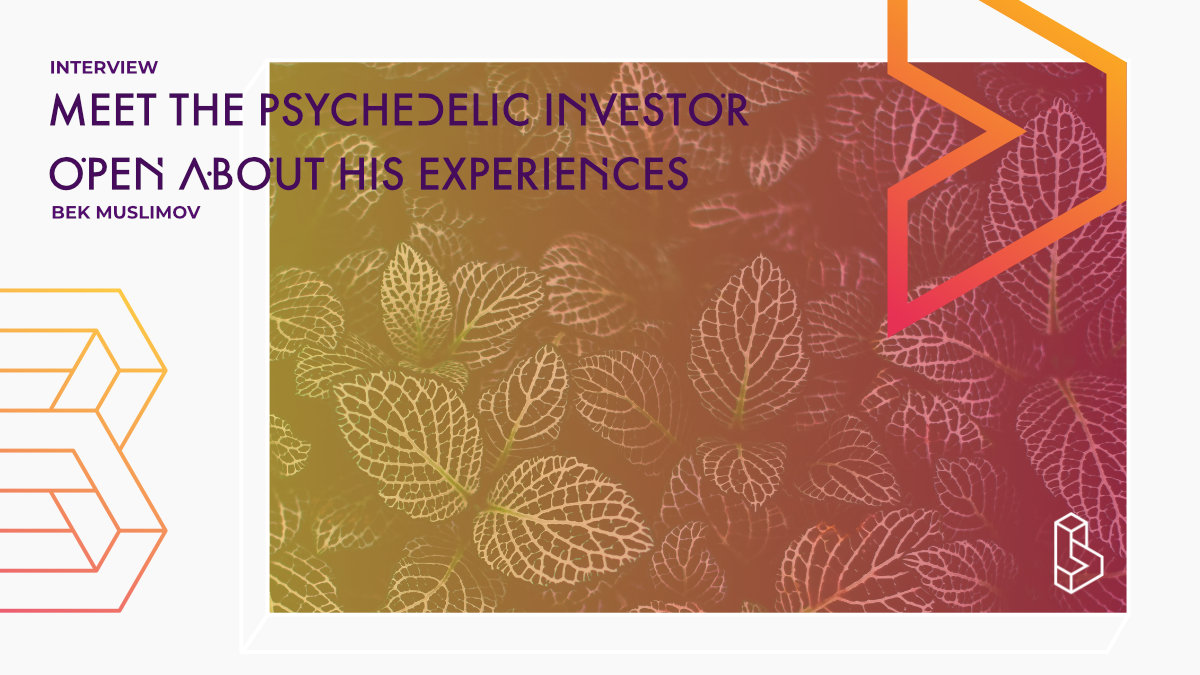 Bek Muslimov is a Co-Founding Partner at Leafy Tunnel. Over the past 7 years, he’s been investing in European life sciences and technology companies. Bek has an MBA from London Business School and is completing an MSc degree in Applied Neuroscience at King’s College, Institute of Psychiatry.

Our founder, Floris Wolswijk, spoke with Bek Muslimov to learn about Leafy Tunnel’s investment strategy and what brought him to invest in psychedelics.

Why do you do this work? What experiences in your life have shaped you to start a 30 million fund with a focus on psychedelics and cannabis?

I have a few personal stories that have shaped my decision to start Leafy Tunnel with Nikolay Tretiyakov (Co-Founder) and Andrey Makiyevskiy (Principal). Firstly, I am originally from Kazakhstan and moved to London 15 years ago. Growing up in Kazakhstan in the post-Soviet era was difficult for everyone. A lot of families suffered financial hardship. There was a lot of poverty and unemployment, so people resorted to various ways to cope with anxiety and depression, with alcohol being one of them.

Looking back, mental illness was widespread throughout many countries in the regions during this post-Soviet period. People didn’t really talk about these issues due to the stigma, so people turned to alcohol instead. As we now know, alcohol is not a good way to combat depression and anxiety. Witnessing this and having such experiences was very important in my life.

Before launching the Leafy Tunnel fund, as part of a previous investment firm my partner and I were looking to back first-time venture capital fund managers in Europe and made cornerstone investments into five European venture funds. Seeing how our investments as a limited partner resulted in those funds building a legacy of subsequent funds was an inspirational story for my partner and me to spin out from where we worked and eventually start our own fund.

We’ve been investing in cannabis since 2012, and in 2018 we saw that cannabis was beginning to pave the way for psychedelics and for the medical community to revise the attitude towards these stigmatised compounds. Eventually, we made our first investment in atai Life Sciences.

Those early investments in cannabis and psychedelics allowed us to see, over a decade now, how the medical and scientific community were changing their attitudes toward stigmatised compounds. With cannabis, we were seeing how parents of children with epilepsy were struggling to provide them with adequate treatment solutions, and cannabis was found to be effective in treating epilepsy.

With psychedelics, we’re seeing that the solutions currently available in the mental health industry are not fit for purpose to address the ongoing mental health crisis. Having my own psilocybin experience at a Synthesis retreat in the Netherlands was a valuable experience to see first-hand the therapeutic potential of these compounds.

Do you see any significant differences between the cannabis field and that of psychedelics? Do you see the signs going quicker or slower? Is there more or less stigma?

With cannabis, the recreational component weighs on medical research by creating barriers. For example, some stigma still exists amongst doctors regarding prescribing cannabis. In the U.S., cannabis also remains federally illegal and is still considered a Schedule I drug, which prevents medical and scientific research on the drug. Europe doesn’t have that prohibition on a state level, which creates a window of opportunities for medical and pharmaceutical cannabis companies in this region.

With cannabis, a lot of value is derived from the recreational sector. In Europe, we’re seeing recreational use being permitted faster than we thought it ever would be. Germany, for example, is leading the way with their recent efforts. There are a lot of differences between cannabis and psychedelics overall, with psychedelics taking a much more pharmaceutical angle, with the main use being the treatment of mental illness.

There is a saying, “practice what you preach.” We’ve all started to positively impact society through a collective effort to address the mental health crisis. There is still a lot of stigma around psychedelics, and there is more research that needs to be done. Every doctor will say, “don’t harm your patient,” and I think that’s the mantra for every medical professional. The same goes for anyone who is contributing to the sector, including investors.

Before having had my own experience, we did a lot of research on psychedelics regarding their therapeutic potential and harm potential. We found a lot of studies showing that psychedelics have a low harm potential and low addiction profile while also promoting neuroplasticity. Having tried psilocybin myself allows us to relate to patients using these compounds to address their mental illnesses.

Over the coming five to 10 years, where do you expect the industry to go? Where do you see the most growth happening?

Most of the value in the space at the moment is coming from biotech companies, and drug development companies and most of those companies got in at the first wave of psychedelic industry growth. For instance, COMPASS Pathways with psilocybin or MAPS with MDMA.

Over the coming years, we believe new biotech companies will emerge, so the accrual value to pharmaceutical companies will continue. The competition will also increase, and we’ll see that high-quality companies with strong expertise, complementary skill sets and backgrounds are the ones that are going to stay and win in this space. We also see that area of diagnostic tools in the mental health sector is particularly ill-equipped, so the companies that are using biomarkers to help guide their decisions in the drug development process, and we think these types of companies are going to do well.

We also see companies emerging in the ancillary space such as training of practitioners, data intelligence, etc. Starting next year, Oregon is going to allow users of psychedelics in medical facilities. Licensed facilitators will be able to run the psychedelic treatments, which will also be a catalyst for the industry’s growth.

We’ve invested in a company called Maya Health, a software solution for psychedelic practitioners to capture the data from patients throughout their psychedelic journey. Companies like this will create data that will allow the industry to see how psychedelic treatments are effective for mental illness in the real world. Thus, psychedelic practitioners build a database of real-world evidence that be used by drug development companies to guide their decisions. The emergence of real-world data is going to be important going forward.

Why would a psychedelic startup be the perfect company to gather real-world evidence and not a company that’s providing ancillary services already outside the field of psychedelics?

With Maya Health, the founder David Champion developed the company out of the enormous unmet need for psychedelic practitioners to be able to have a solution for them to track the mental status and overall wellbeing of the patient.

They are very well positioned to understand the customers’ needs in comparison to large companies that aren’t familiar with working with small clinics or retreats. Maya Health and its founder are on a mission, which we believe is very important for companies to be successful.

You’re also invested in Ceretype. What can they measure that is now being missed in clinical trials? Why would that information be valuable?

In particular, mental health and psychiatry have one of the lowest success rates for getting drugs approved. One of the reasons for that is that it doesn’t have a biologically-based approach, so a lot of R&D and money gets wasted in early-stage trials.

There are companies emerging in the diagnostic space that change this by using biomarkers that help patients and drug development companies make better decisions. This will help to reduce the R&D process, save money and result in more efficacious drugs.

One example I like to use is two studies done with psilocybin, one at Johns Hopkins and the other at Imperial College – both studies produced starkly different results. This is because they used an outdated approach to measure the drugs, the DSM. The DSM manual was developed in the fifties, so it was a very archaic and outdated approach that guided the drug development companies.

We’re seeing companies coming into this space and changing this by bringing a more granular approach to diagnostics of mental illness by stratifying patients by different phenotypes.

Is there a metric that you think people aren’t paying too much attention to or putting too much value in?

First and foremost, we look for founders that are there for the right reasons. This helps to bring perspective and how they see things, and how they make decisions. Having a solid team makes all the difference when we’re looking at the company. Whether the founders are there for the right reasons or whether they are there to ride the hype, we often see them make decisions that are too short-term orientated, which could cost the company in the long term.

For example, some companies will try to speed up the process of running a Phase I trial to be able to go public. Further down the road, when designing their Phase II trial, their earlier decisions can often cost them if they were too short-term orientated.

We’re looking for founders who want to change the industry, who want to see their drugs going through the entire development process, getting all the approvals and actually being administered to patients, changing their lives.

If you try to quantify all this, I guess the metric would be capital efficiency. If a founder can get a lot done with less, this tells us he is very resourceful, and again, that is there for the right reasons. Unfortunately, we often see founders who may not be as strategically sound in the beginning and give away too much equity, which harms them in the long run.

Are there still groundbreaking startups coming your way? Or have all the good ideas been taken already?

Not at all. An idea is only part of the equation. A lot comes from the tenacity and resilience of the founder and their strategic mind. There are so many ideas out there for founders to grab. We’re only in the first innings of the industry. We’re all very excited about how this industry will mature and evolve, and we can’t wait to see what new startups will emerge dedicated to transforming the lives of patients.