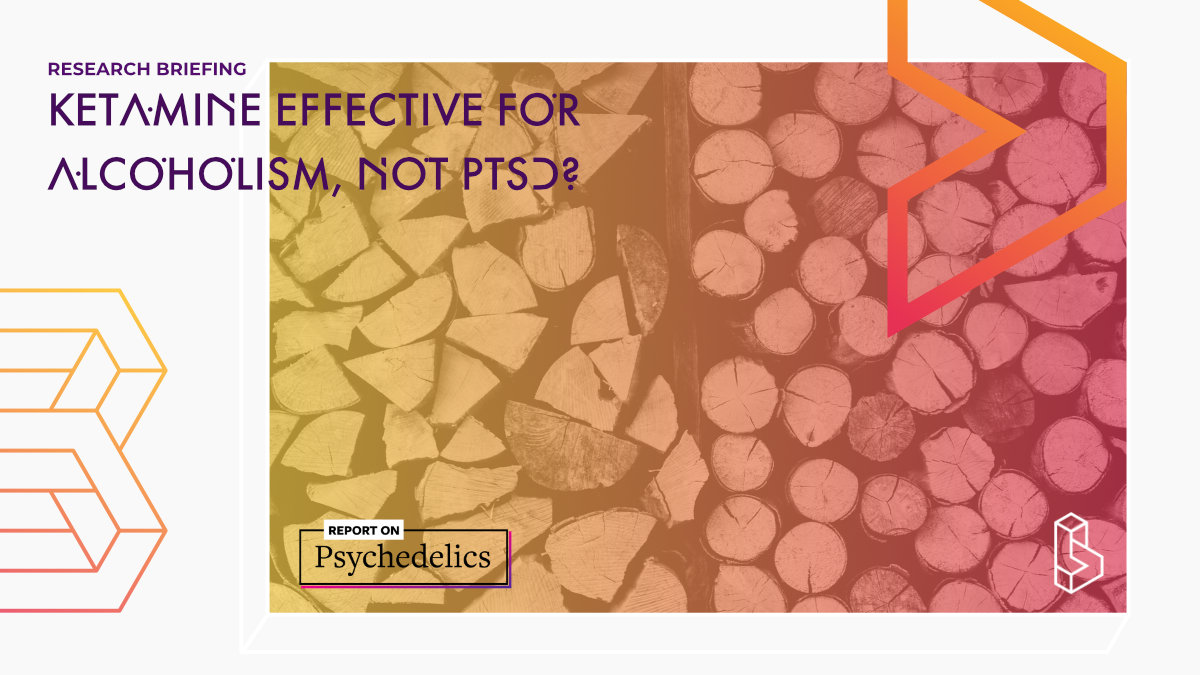 In the Research Briefing

Ketamine and therapy better at abstaining one from drinking excessively

Psychedelics are poised to be both viable and effective treatment options for many people living with mental disorders whom conventional treatments have failed. One of these disorders is substance use disorder (SUD), commonly known as addiction. At present, there is no cure for SUDs but a range of therapies and tools exist depending on individual needs. With current treatment needs unmet, psychedelics have the potential to help people with these disorders. A well-known example of this is the psilocybin for smoking cessation trial which was carried out by researchers at Johns Hopkins. The results of this trial, and other research, has led many in the field to believe other psychedelic compounds have the potential to treat SUDs. One of these compounds is ketamine.

Since the early 2000’s some research has taken place into using psychedelics to treat different SUDs. Professor Celia Morgan and colleagues reviewed the state of this research in 2017. While the results of trials at this point were positive, the stated randomized-controlled trials (RCTs) are needed. In terms of ketamine research, some RCTs have taken place exploring its effectiveness in treating SUDS including cocaine dependence and alcohol use disorder (AUD), with both trials finding positive results.

The present study is the first in the world to explore the effects of serial ketamine infusions in combination with psychotherapy to treat AUD over a 6 month follow up period. Sponsored by Awakn Life Sciences and led by Celia Morgan at the University of Exeter, the Phase II study involved 96 participants with severe AUD as defined by the DSM-V. Participants were required to achieve initial abstinence from alcohol for at least 24hrs prior to undergoing the randomization process which allowed the researchers to examine the effects of ketamine on prolonging abstinence. Participants were randomly assigned to four groups:

Following baseline measurements and randomization at visit one, participants received either psychological therapy or alcohol education on visits 2 to 8 after which marked the end of treatment sessions. These therapy/alcohol education sessions always preceded infusions. Known as KARE, the therapy sessions lasted on average 1.5 hours and were based on manualized mindfulness-based relapse prevention to help participants live a meaningful life without alcohol. Participants were taught a number of relapse prevention techniques, kept a journal and completed various other exercises. The alcohol education group did not involve any formal psychological components and instead focused on things like the driving forces of addiction, the biological effects of alcohol and ways to improve healthy living. Infusions were administered on visits 2, 4 and 6 and were always separated by a minimum of one week.

The findings of the present study indicate that ketamine-assisted therapy can be used to help those living with AUD by promoting alcohol abstinence. The results point toward the added value of psychotherapy when used in tandem with ketamine. The therapy component is often excluded in trials with ketamine and other mental disorders like depression and therefore, the addition of therapy in future ketamine research and clinical practice may prolong the clinical benefits. Moreover, treatment was generally well tolerated with no serious adverse events reported.

The authors do acknowledge a number of limitations in their study. Primarily, the generalizability of results is limited due to the strict enrollment criteria. Blinding was also difficult, especially if participants had any past experiences with ketamine and/or psychotherapy. The researchers reported that nearly all participants in the ketamine group were able to identify that they had received the active drug which may have affected results. Furthermore, some study participants had prior experiences with ketamine which also raises issues surrounding blinding.

Despite these limitations, the trial is the first to show that three subanaesthetic doses of ketamine support abstinence from alcohol and that this abstinence may be further enhanced when ketamine treatment is combined with therapy.

Community practices show effectiveness of ketamine outside of clinical trials

Given the legal status surrounding ketamine, it is widely available as an ‘off-label’ treatment for a range of mental health disorders. As a result, numerous clinics exist across the globe offering ketamine-assisted therapy for the treatment of mental disorders like depression and anxiety. While many clinical trials have taken place to prove the effectiveness of using ketamine to treat the aforementioned disorders, little attention has been paid to how these clinical research findings have translated into real-world practices.

The present study sought to address this research gap by analysing the data from depressed patients who received ketamine-infusion therapy (KIT) at community-based practices in the U.S. from 2016-2020. Care providers used the Patient Health Questionnaire (PHQ-9) to assess depressive symptoms. Patients received 4-8 ketamine infusions over 7 to 28 days.

This study is the largest published analysis to date that examines the effectiveness of a standard KIT induction protocol in depressed patients treated at community clinics across the U.S i.e a real-world setting. The findings of the study are roughly in line with that of previously reported results in the clinical setting. The authors do acknowledge some limitations to their findings. For example, unblinded clinicians who want to see their patients improve as well as the patients themselves who paid for KIT expecting positive outcomes may have positively skewed results. Furthermore, it was not assessed if patients were ketamine naive.

Overall, the present paper is one of the first to address the effectiveness of ketamine-assisted therapy in a real-world setting. As other psychedelic-assisted therapies become available, similar studies will be needed to assess how treatment protocols designed in the clinical setting can translate into real-world practices. In an ideal world, these protocols and therapies should directly translate into therapeutic outcomes observed during research. Therefore, studies will be needed to determine if this is true.

Ketamine not effective for PTSD in active service members & veterans

Ketamine is widely available as an off-label treatment for mental health disorders. While the ability of ketamine to alleviate symptoms of disorders like depression and anxiety has been well-documented, other than positive anecdotal reports, there is currently a lack of clinical evidence demonstrating the therapeutic effects of ketamine for other mental health disorders such as PTSD. Despite this lack of evidence, ketamine is still being used off-label to treat these disorders in regions where it is legally permitted. In order for ketamine-assisted therapy to become a viable and accessible treatment for people everywhere, clinical evidence is needed.

158 veterans and active service members took part in this study. The study was a double-blind, placebo-controlled, randomized three-arm study. Participants were randomised to three groups: standard dose (n=51, 35mg/70kg), low dose (n=53, 14mg/70kg) and placebo (n=54, saline). Participants received ketamine or placebo twice per week for four weeks yielding a total of eight dosing sessions. Participants were assessed at baseline, during treatment, and for 4 weeks after their last infusion using the self-report PTSD Checklist for DSM-V (PCL-5) and the Clinician-Administered PTSD Scale for DSM-V (CAPS-5). Researchers simultaneously assessed the antidepressant effects of ketamine in this population using the Montgomery-Åsberg Depression Rating Scale (MADRS).

The present study assessed the ability of ketamine to alleviate symptoms of PTSD in veterans and service members. It was found that repeated doses of ketamine did not significantly impact symptoms of PTSD. However, a significant antidepressant was observed. These findings may partially be explained by the study cohort. The previous studies assessing ketamine for PTSD were carried out in civilian populations, the majority (77%) being female. This stands in contrast to the present study of mainly male veterans and service members.

In the world of psychedelics, many have the tendency to overestimate the therapeutic potential of psychedelics. Touting psychedelics as wonder drugs for all types of mental health disorders can negatively impact the experience of patients and arguably, the chance of psychedelics becoming widely available. Based on the research above, people may seek the off-label use of ketamine to better their mental health only to find the therapy to be ineffective while also being out-of-pocket given the high prices of these treatments. Ultimately, more research is needed to clarify the effects ketamine has on PTSD before any conclusions can be drawn.

Looking at the brain through positron emission tomography (PET), using a radioactive tracer element, researchers confirmed that psilocybin, or its metabolite psilocin, attached itself most to serotonin (5-HT2a) receptors that are situated in the Default Mode Network (DMN), an area often implicated in the action of psychedelics.

Another survey (n=354) sought to characterize the knowledge, perceptions and past use of psychedelics among people with fibromyalgia (FM), a disorder characterized by widespread pain in muscles and bones, fatigue, sleep, and mood issues. It was found that 29.9% of respondents reported past use of a psychedelic, perceptions of benefit from use were generally neutral (59.4%) or positive (36.8%). Less than 3% reported that using psychedelics negatively impacted their overall health or pain symptoms. 11 out of 12 patients using psychedelics specifically to treat pain reported improvements in their symptoms.

Finally, an interview study assessed the experiences of adult couples (n=8) who self-reported active MDMA use. Four overarching themes were identified: Conscious Use, A Tool for Exploring, Planned Recovery, and Difficult Experiences. Couples collaborated on becoming “set” for their experience and described positive effects on communication, intimate bonding, and providing a relationship “tune-up,” among other durable changes to the relationship. These findings suggest the possibility of informed, non-problematic adult use of MDMA for cognitive and relational enhancement.