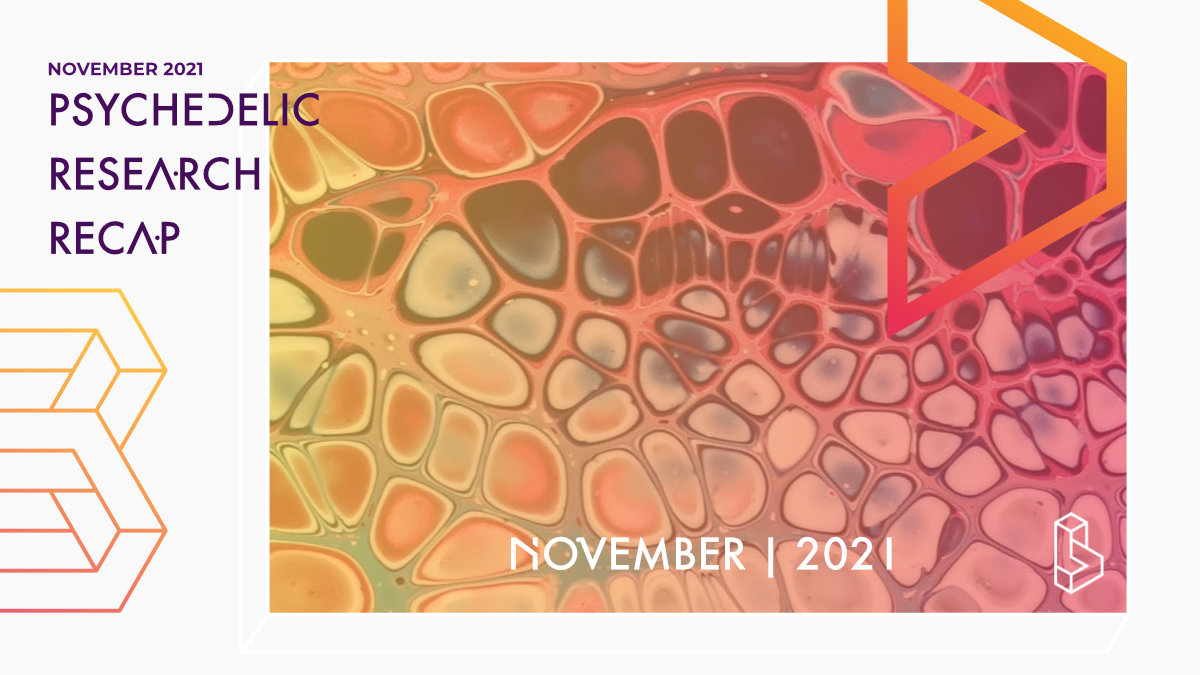 November proved to be another productive month for psychedelic research. A variety of surveys looked at how psychedelics alter beliefs, reduce opioid use, and the effects of microdosing. A finished Phase I trial clears 5-MeO-DMT for the next step, cannabis intensifies a psychedelic experience, and psychedelics may help with Alzheimer’s.

This month, our team also enjoyed the Horizons Conference and we expect some more awesome research papers to come out soon. These include new findings on psilocybin for smoking cessation, psilocybin for anorexia (of which we cover one review this month), and how psychedelics can open a ‘critical period’ where learning/change can happen, possibly providing a unified theory of psychedelic action.

You can find all the papers in our database, and the ones that weren’t added in our November Link Overview.

Psychedelic use in the wild

It will still be some years until (classical) psychedelics will be initiated into the therapist’s office. At this time, psychiatrists, practising in the UK, feel that they don’t have the training to deliver psychedelic-assisted therapy. The majority of them (77%) are positive that psychedelics have therapeutic potential. So without widespread access, many researchers find valuable data in surveys (such as the ongoing Global Drug Survey 2021).

An ongoing discussion in the field is the causality and necessity of mystical experiences to improvements in well-being. Chris Letheby‘s new book ‘The Philosophy of Psychedelics’ covers the psychedelic experience and its implications in much more detail. A group of researchers is making the case to use Semantic Scale Network (SSN) analysis to develop newer scales. They also analysed the MEQ and find overlap with measures of awe, inspiration, depression, spirituality, and more.

Back to the world of recreational users, another survey, by Brandon Weiss and colleagues, investigates the changes in personality after a psychedelic experience. They replicated earlier findings and see an increase in agreeableness and a decrease in neuroticism. Interestingly, they suggest that psychedelics may be used to treat interpersonal elements of personality pathology as well as loneliness.

Psychedelics can change our beliefs, and a survey that we covered as a pre-print before, ‘Psychedelics alter metaphysical beliefs,’ sees that recreational users shifted towards more panpsychism and fatalism. It was not examined if this is a case of transference of beliefs from others (e.g. a facilitator/shaman). An ethnographic study, by David Dupuis, did just that and finds that the ability of psychedelics to induce hyper suggestibility in the absence of appropriate guidelines might lead to problematic effects.

Microdosing psychedelics has found many supporters and seems to help many improve their well-being. What leads to these effects is hotly debated (see our microdosing page), with many researchers thinking that placebo, expectancy, regression-to-the-mean, and other such effects may play a large role. A large-scale (n=8703) survey tries to add another data point to this discussion but also suffers from several methodological issues and conflicts of interest.

There are many factors that help explain why psychedelics can help with mental health & substance use disorders and generally can improve well-being. A review by Shaklia Meshkat and colleagues examine the pharmacogenetics of ketamine, meaning they look at genetic variations and the influences it has on the outcomes after ketamine. Those with less brain-derived neurotrophic growth factor (BDNF) respond less well to treatment or need a higher dose. They also find CYB2B6 to be associated with more dissociative effects, and NET with higher blood pressure.

More work on the interaction of genes and psychedelics was done by Aurora Savino & Charles Nichols. Their study in rats finds that the expression of genes (co-expression networks) becomes less centralized and more complex (increased entropy) after chronic exposure to LSD. This mirrors human research where similar effects (increased entropy) have been observed at the molecular level.

Looking at the effects of psychedelics through the lens of behavioural pharmacology is done in an academic book chapter by Justin Strickland and Matthew Johnson. The chapter provides a great overview of the intersection between molecules (pharmacology) and mysticism.

Do psychedelics work less well for those who are using antidepressants (e.g. SSRIs such as escitalopram)? Studies with MDMA for PTSD are pointing towards less effect, even after tapering off SSRIs. But a new study that gave participants escitalopram before psilocybin treatment didn’t see a drop in positive mood effects. It did show a reduction in bad drug effects such as adverse cardiovascular effects. But, the relatively short pretreatment with escitalopram (10-20mg for 14 days) may not be typical of how SSRIs are being used (usually for years).

Psychedelics seem to have transdiagnostic effects, meaning that they can be applied to multiple mental health disorders. For instance, we’ve seen research on the effectiveness of psilocybin for depression, as well as for smoking cessation. Depression, PTSD, and various addictions have been discussed in much detail before, but that is not where the transdiagnostic ability of psychedelics stop.

Albert Garcia-Romeu and colleagues make the case for classical psychedelics in the treatment of Alzheimer’s. One way psychedelics can help is to relieve comorbid depression and anxiety. Possibly even more interesting, and speculative is preclinical data that indicates a potential for psychedelics to slow or reverse brain atrophy, enhance cognitive function, and slow progression of Alzheimer’s.

Psychedelics, psilocybin in particular, are being investigated for the treatment of anorexia, and eating disorders in general. The classical psychedelics aren’t the only ones that could help as a review of ketamine for anorexia points out. Johanna Keeler and colleagues argue that the ability of ketamine to induce neuroplasticity, neurogenesis, and synaptogenesis and the antidepressant effects can all contribute to it being a viable treatment. Alas, we are only aware of several case studies and one small study investigating this more.

Another avenue less explored is the possibility of psilocybin to help prevent suicidal behaviour. A review by Robertas Strumila and colleagues puts forward several reasons why this could be a good route to investigate further. A study in mice finds more data points for how psilocybin may help reduce cravings for alcohol as it seems to restore a deficiency in a receptor for glutamate (mGluR2).

5-MeO-DMT has been associated with improvements in mental health in reports from (intentional) recreational users. If this business trip (coined due to its short duration) can become a medicine is a question being investigated by at least three companies. One of these, GH Research, has published a successful Phase I safety trial in cooperation with researchers from Maastricht University. There was a lot of variance between the subjective experiences of the subjects (n=22) and they recommend using dose escalation in further trials. Also reported this month were the positive results of reduced PTSD, alcohol misuse, and increased psychological flexibility after veterans (n=51) underwent treatment with ibogaine or 5-MeO-DMT.

The rest of the research

There are challenges to scaling up psychedelic implementation and it’s good to consider the roadblocks at this moment in time. To get psychedelics to community clinics several challenges need to be overcome such as 1) poor clinical practice (e.g. see reporting this month by Shayla Love), and 2) lack of infrastructure.

This month we added 25 psychedelics papers published in November 2021. We also linked to 59 more papers in our November Link Overview. You may also have found our new, expanded, menu with a lot more pages than before. We’re currently in the process of updating all of these pages and should have new versions up sooner than later. You can already browse through all our articles, our research articles, and all of the monthly overviews.