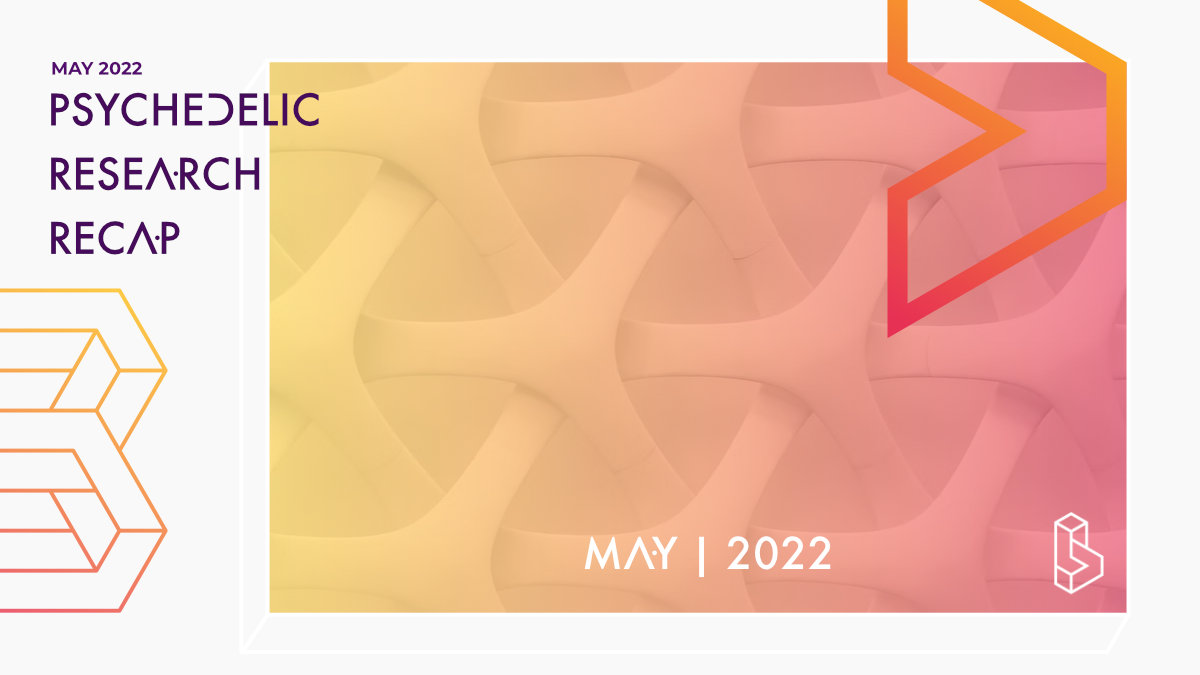 We’re now almost halfway through 2022, and psychedelic research shows no signs of slowing down. Over May, we continued to gain a better understanding of how psychedelics work in the brain while new scales to measure aspects of the psychedelic experience were developed. Several potential new indications for psychedelic medicine were also put forward.

You can find all the papers in our database and those that weren’t added in our May Link Overview.

What’s going on in the brain?

Several studies published over the month of May further explored the effects psychedelics have on the brain. Some researchers used the latest neuroimaging techniques to see what’s going on at the physiological level, while others assessed the impact of psychedelics on different cognition features.

This meta-analysis (n=1,014) investigated the effects ketamine and esketamine have across several domains of cognition in healthy volunteers. Deficits in verbal learning/memory were most prominent, whereas response inhibition was the least affected. Adverse effects were dependent on infusion dose and plasma level but unaffected by enantiomer type, route of administration, sex or age.

Sticking with ketamine, this study (n=86) assessed the effects of six infusions of ketamine (35mg/70kg) over two weeks on suicidality in patients with depression. Several scales were used to assess response to treatment, including the Montgomery-Asberg Depression Rating Scale (MADRS). MADRS total score and processing speed (but not other cognitive domains) were significant partial mediators of the association between ketamine treatment and improvements in suicidal ideation.

At Johns Hopkins, Manoj Doss and his colleagues explored the effects of different psychoactive drugs on episodic memory and cognition by reanalysing data from ten previously published datasets in this preprint. Sedatives, dissociatives, psychedelics, stimulants, and cannabinoids had unique patterns of effects on these mnemonic processes dependent on which phase of memory while all drugs at encoding, except stimulants impaired recollection, and sedatives, dissociatives, and cannabinoids at encoding impaired familiarity. Psychedelics at encoding tended to enhance familiarity and did not impact metamemory.

Researchers from the University of Basel investigated the effects of LSD, d-amphetamine and MDMA on thalamocortical intrinsic functional connectivity (iFC) in this study. Each substance elicited auditory-sensorimotor-thalamic-hyperconnectivity compared to placebo, despite predominantly distinct pharmacological actions and subjective effects. LSD produced salience (SAL) hyperactivity, whereas MDMA and amphetamine produced hypoconnectivity with SAL. This range of activity is similar to that seen in patients with psychotic disorders.

In this paper, some of the most well-known authors in the field of psychedelics review 42 studies where resting-state functional magnetic resonance imaging (fMRI) was used and assess methodological variations across studies. Nearly all studies varied in data processing and analysis methodology. Guidelines are proposed to ensure consistency across the field.

Findings from an animal study suggest that the sensitising effects of MDMA are not due to changes in MDMA-produced synaptic overflow of serotonin but are more likely related to alterations in serotonin receptor mechanisms and/or dopamine neurotransmission.

This paper explores historical and sociological influences on current psychedelic administration in mainstream European and American clinical research settings. It considers these dynamics in relation to cognitive-behavioural therapies (CBT) and acceptance and commitment therapy (ACT). The paper advocates for CBTs for several reasons in psychedelic research and discusses the different types of CBTs and how they can be used to inform the preparation, session, and integration phases of psychedelic psychotherapy.

Another theory put forth this month describes the development and initial validation of the Integration Engagement Scale (IES) to capture positive behavioural engagement with integration and the Experienced Integration Scale (EIS) to capture internal aspects of feeling integrated following a psychedelic experience. The scales were designed to inform the creation of enhanced integration support, and the initial data indicates the scales are valid and reliable.

Balázs Szigeti and the team at Imperial College London have proposed that a placebo control group is not sufficient to control for expectancy effects in microdosing trials, arguing that placebo-controlled studies are more fallible than conventionally assumed. In the preprint, they use computational modelling to show that the combination of weak blinding and positive treatment expectancy can lead to activated expectancy bias (AEB), which is an uneven distribution of expectancy effects between the treatment arms due to patients recognising their treatment allocation in psychedelic microdosing randomised controlled trials.

On the chemistry side of things, researchers published a new method for synthesising 5-MeO-DMT from a cell line from tissue obtained from the parotoid gland (saliva) of the Sonoran Desert toad (Incilius alvarius).

This survey study (n=474) assessed participants’ perception, potential usage, and recommendations for psychedelic drugs being used to treat mental illnesses. Results show that participants were not open to their usage of psychedelics but were more open to recommending psychedelic therapy to their loved ones.

Another survey (n=980) assessed the perspectives of patients with functional neurological disorders (FND) (e.g. multiple sclerosis, stroke) on novel treatments like psychedelic therapy. 15% of respondents reported using illicit substances to manage their symptoms, with the majority experiencing no or minimal physical and psychological sequelae. 46% of respondents said that they would be willing to try medically supervised psychedelic therapy.

A survey in the Netherlands (n=377) found that regular participants in ayahuasca ceremonies showed better general well-being, fewer lifestyle-related diseases, more physical activity, and a more balanced diet than Dutch normative data. Ceremony attendees also used less alcohol throughout the COVID-19 pandemic, but they did use more illegal drugs than the general population.

A case has again been made for using psychedelics to treat body dysmorphic disorder (BDD). Preliminary evidence suggests the safety, feasibility, and potential efficacy of psychedelic treatments in disorders that share similar psychopathological mechanisms with BDD. A Phase II study is suggested – luckily, there is one underway from COMPASS Pathways.

This paper proposes that the dream, hypnagogic, and psychedelic states share common features that make them conducive to supporting some aspects of scientific creativity and examines the putative underlying neurophenomenological and cognitive processes involved.

Using the most up to date research, this review explores the potential of psychedelics in treating mental health disorders, their short- and long-term effects on recreational users, and the neurological and cognitive processes responsible for their effects.

The value of the social sciences tends to be overlooked by biomedical researchers. Yet, its methods can provide insights into phenomena beyond the scope of biomedical research (take the very public dispute that arose from this paper as an example).

This month we added 24 psychedelics papers published in May 2022. We also linked to over 65 more papers in our May Link Overview. With psychedelics research showing no signs of slowing down, we at Blossom will continue to make information on psychedelics as medicine easily accessible.