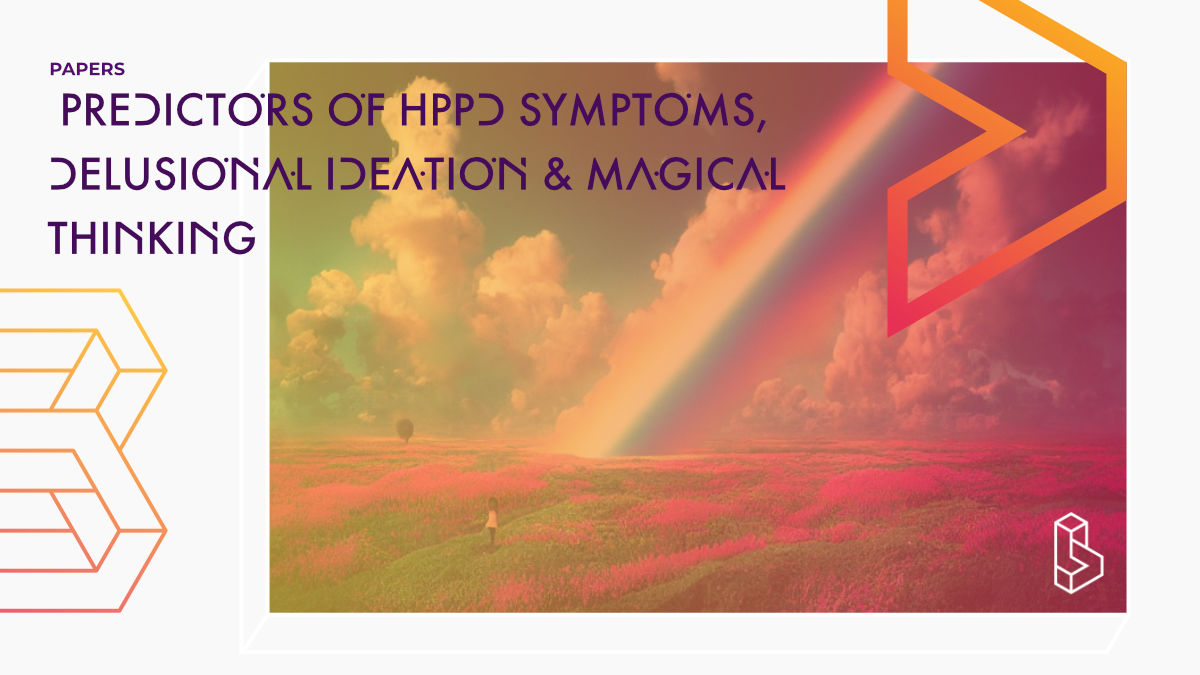 This pre-print survey (n=654 start, n=212 end) finds that 33% report a symptom of HPPD (e.g. intensified colours after the trip is finished), but only 3% report the symptoms as disturbing. The study also finds that the personality trait absorption predicts increases in magical thinking at the end-point (4-weeks).

“Objective: Psychedelics have over recent years been subject to a fast-paced growth in scientific research, clinical applications, commercial investment, and substance use trends by the general public. Yet, concerningly little is known about the frequency of adverse side effects of psychedelic use, despite a breadth of anecdotal reports and largely untested assumptions that inform the screening criteria in modern controlled research. This study aimed to evaluate the frequency and predictive factors of specific, enduring, and potentially undesirable, cognitive and perceptual changes, including symptoms related to delusional ideation, magical thinking and hallucinogen persisting perception disorder (HPPD), following real-world psychedelic use in naturalistic settings.

Method: In this prospective online cohort study, participants were assessed at 3 timepoints: 1 week before (N = 654) a planned psychedelic experience, and at 2 weeks (N = 305) and 4 weeks afterwards (N = 212). Correlational analyses were performed between lifetime psychedelic use, delusional ideation and magical thinking reported at baseline. Additionally, longitudinal changes in these variables were investigated using Friedman’s test, differentiating between novice (≤ 5 times psychedelic use) and experienced users (> 5 times psychedelic use). Further exploratory analyses of longitudinal increases in delusional and magical ideation were performed using logistic regression to identify predictors of change. The frequency of enduring visuo-perceptual effects indicative of HPPD was assessed at the 4 week endpoint. Predictor variables for the occurrence of such effects were determined via logistic regression.

Results: Frequency of lifetime psychedelic use was positively, albeit negligibly, correlated with higher baseline levels of delusional ideation rs = .11, p = .01), and magical ideation (rs = .12, p = .003). Contradictorily, delusional ideation was significantly reduced 4 weeks after the reported psychedelic experience. Baseline personality trait absorption was found to be a predictor of persistent increases in magical thinking at 4 weeks after the acute psychedelic experience. Approximately a third (32.7%) of participants, reported symptoms related to HPPD, with ‘intensified colours’ reported most frequently. However, in line with previous findings, only 2.94% (n = 2) of these respondents perceived these symptoms as distressing. Younger age, female gender, absorption, less non-psychedelic substance use in the last 6 months and non-retreat setting were found to be significant predictors of HPPD-like symptoms.

Conclusion: The present study found an association between the measured cognitive thinking styles and lifetime psychedelic use at baseline. However, observed longitudinal reductions in delusional ideation from before to after the assessed psychedelic experience suggest that this relationship may not be causative, and that the observed correlation with psychedelic use might be driven by other underlying factors. Although HPPD-like symptoms were more common than expected, the absence of associated distress might explain the relatively low incidence of HPPD diagnoses. Predictors of HPPD have been identified, which may help to inform an at-risk profile. Nevertheless, these results warrant further controlled research on the frequency of enduring, yet subtle, adverse side-effects in clinical and non-clinical populations, being limited by the observational nature of the current study.”

Psychedelics have been shown to elicit potent effects on emotion, cognition and perception. They have shown promising results for treating mood and addictive disorders, as well as positive, long-lasting changes in behaviour and personality in healthy individuals. Although the use of psychedelics in modern controlled research is generally considered safe, case reports of serious adverse reactions to recreational, naturalistic psychedelic use suggest that these substances are not without risk.

The most salient concerns regarding the intrinsic side effect profile of psychedelic drugs are their potential to trigger psychotic episodes or enhance schizotypal tendencies in healthy individuals, and to induce enduring visuoperceptual aberrations, which are clinically recognised as hallucinogen persisting perception disorder (HPPD).

Hannes Kettner
Hannes Kettner is a Ph.D. student at the Imperial College Centre for Psychedelic Research and a Scientific Officer at MyDelica. He is interested in studying real-world psychedelic use, including ceremonies, retreats, burns, and what we can learn from them about creating a positive set & setting.

Abnormal visual experiences in individuals with histories of hallucinogen use: A web-based questionnaire
This questionnaire-based study (n=2455) found that the risk of Hallucinogen Persisting Perception Disorder (HPPD) may increase with greater past exposure to specific hallucinogens, symptoms were rarely (4.2%) perceived as distressing/impairing.