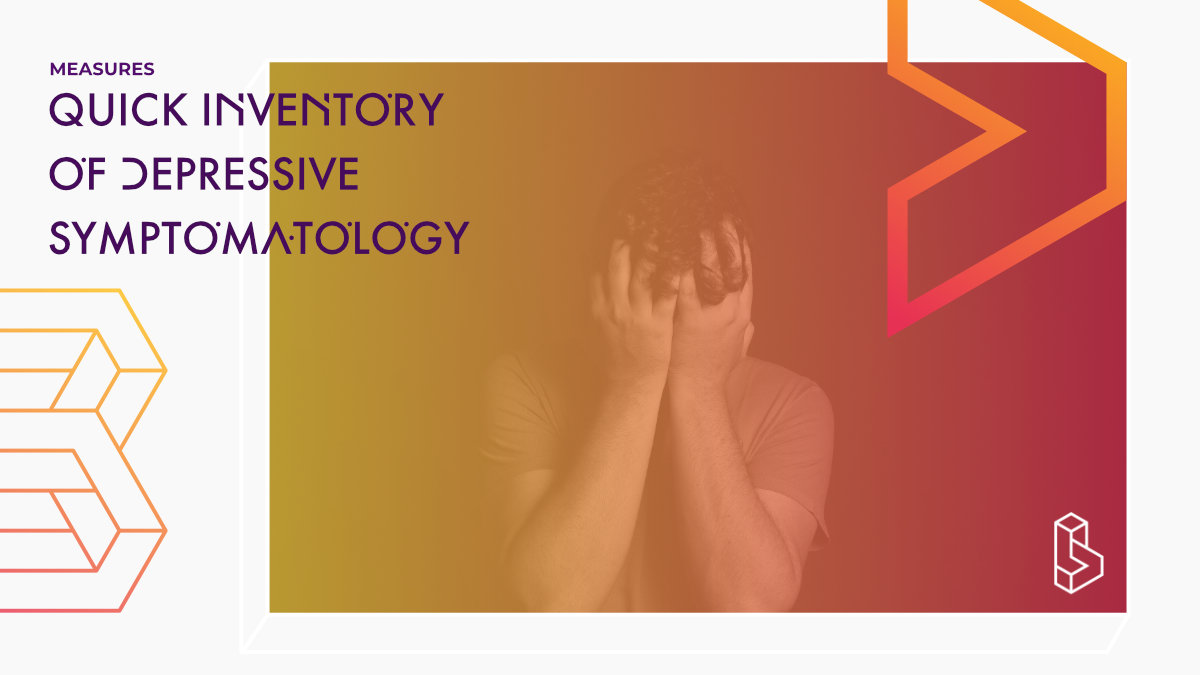 The Quick Inventory of Depressive Symptomatology (Self-Report) (QIDS-SR16) is a self-report tool designed to screen for depression and measure changes in the severity of symptoms. There are 16 questions, based on how you have been feeling in the last 7 days. The scale is scored as follows; scores of 0–5 indicate no depression, 6-10 indicates mild depression, 11-15 is moderate depression, 16-20 is severe depression, and 21-27 is very severe depression.

Find out more about Quick Inventory of Depressive Symptomatology

Antidepressant effects of a psychedelic experience in a large prospective naturalistic sample
This survey study (n=302) explored the effects the naturalistic use of psychedelics (i.e. outside of a clinic) has on symptoms of anxiety and depression, and how various pharmacological, extrapharmacological and experience factors related to outcomes. Measurements were taken at four different time points, with reductions in depressive symptoms observed at 2 and 4 weeks. A medicinal motive, previous psychedelic use, drug dose and the type of acute psychedelic experience were all significantly associated with changes in self-rated QIDS-SR-16.

Replication of distinct trajectories of antidepressant response to intravenous ketamine
This study (n=298) sought to replicate treatment response findings using previously collected data from a community-based sample of patients with depression receiving intravenous (IV) ketamine. Using growth mixture modelling and the QIDS-SR as the measure of depression, the same three antidepressant treatment response trajectories were observed. A history of childhood maltreatment was associated with more optimal treatment outcomes for patients reporting a severe level of depression at baseline, and measures of suicidality followed similar improvement patterns.

Psilocybin with psychological support for treatment-resistant depression: an open-label feasibility study
This is the first modern study (n=12) on psilocybin and its effects on treatment-resistant depression. It shows that two sessions with psilocybin (10mg and 25mg) in combination with psychological support can reduce depressive symptoms over periods of one week to three months after treatment. Psilocybin was well tolerated by all of the patients, and no serious or unexpected adverse events occurred.

Trial of Psilocybin versus Escitalopram for Depression
This double-blind placebo-controlled study (n=59) compared psilocybin (2x25mg; 3 weeks apart) to escitalopram (SSRI) over a six-week period and found large improvements in depression scores for those suffering from depression (MDD) in both groups. On the main measure of depression, the QIDS-SR-16, there was no significant difference between both groups. The study did find significant differences, favoring psilocybin, on the HAM-D-17, MADRS, avoidance, flourishing, wellbeing, and suicidality.

Pharmacogenetics Associated With IV Ketamine
The Canadian Rapid Treatment Center of Excellence (CRTCE) is a healthcare facility principally focused on providing best practices of intravenous ketamine treatment to adult patients suffering from treatment resistant depression. Patients who have received IV ketamine at the clinic are eligible to participate in this study where genetic biomarkers are correlated with response to IV ketamine.

Treatment Study of Bipolar Depression
The purpose of this study is to determine whether a single intravenous administration of an N-methyl-D-aspartate antagonist (ketamine) is safe and effective for the acute treatment of bipolar depression.

Trial of Ketamine and Lithium Therapy in Bipolar Depression
This study is looking at the safety and efficacy of combined ketamine and lithium therapy for treating patients with bipolar depression who are taking a mood stabilizer that is not working for them.

Psilocybin vs Escitalopram for Major Depressive Disorder: Comparative Mechanisms
This is a randomised double-blind clinical trial. The aim is to compare the efficacy and mechanisms of action of psilocybin, the primary psychoactive substance in 'magic mushrooms', with the SSRI (selective serotonin reuptake inhibitor) escitalopram for major depressive disorder (MDD).

Use of Ketamine to Enhance Electroconvulsive Therapy (ECT) in Depression
The primary objectives of this study are to investigate the potential for ketamine anaesthesia to increase the antidepressant efficacy of Electroconvulsive therapy (ECT) and to decrease acute ECT-induced adverse cognitive effects.

Psilocybin and Depression
The main aim of the study is to investigate the possible long-term therapeutic effects of psilocybin on the symptoms of severe depression, as well as the brain mechanisms underlying these changes

An Open Prospective Trial of IV Ketamine in Suicidal Adolescents
This is an open prospective study of a single, low dose (0.5 mg/kg) intravenous (IV) Ketamine in 10 adolescent subjects admitted to Nationwide Childrens Hospital following a serious suicide attempt and who meet criteria for major depression or bipolar disorder I, current episode depressed.

Open Label Ketamine Treatment for Major Depressive Disorder in Veterans
Medically healthy Veterans ages 21-75 that have been diagnosed with Depression will get up to 6 treatments of Ketamine infusions, weekly. After treatment is completed, follow up will occur at 1 month, 3 months, and 6 months after completion of infusions to evaluate the longer term effects of ketamine.

Nitrous Oxide as Treatment for Major Depression - a Pilot Study
We propose conducting a pilot randomized placebo controlled double-blind crossover study in which patients will receive up to 50% nitrous oxide in oxygen or up to 50% oxygen in air for a period of one hour in addition to standard medical therapy.

Ketamine Interleaved With Electroconvulsive Therapy for Depression
Pragmatic, randomised, controlled, parallel group, pilot clinical trial of ketamine vs. midazolam interleaved with electroconvulsive therapy (ECT) as an adjunctive treatment for a major depressive episode. The main purpose of the pilot study is to assess trial processes to help inform a future definitive trial.

Ketamine as an Adjunctive Therapy for Major Depression
Randomised, controlled, parallel-group, pilot clinical trial of ketamine vs. midazolam as an adjunctive therapy for depression. The main purpose of the pilot study is to assess trial processes to help inform a future definitive trial.

Ketamine as a Rapid Treatment for Post-traumatic Stress Disorder (PTSD)
The objective of the proposed study is to test if a single IV dose of ketamine (0.5 mg/kg) decreases symptoms of PTSD.

Examining the Impact of Sirolimus on Ketamine's Antidepressant Effects
The aim of the study is to provide insight into the impact of the immunosuppressant drug sirolimus, on the antidepressant effects of the prototypal rapid-acting antidepressant medication, ketamine.

Continuation Ketamine in Major Depression
As of May 21st, 2012, the purpose of this study is to test the antidepressant effect of ketamine when given repeatedly over a period of 1 week, as well as the use of Lithium as a relapse-prevention strategy for patients with treatment-resistant depression (TRD) who respond to an initial series of ketamine infusions.

Chart Review of Patients Undergoing Ketamine Infusions
This retrospective analysis aims to look at past data in order to further develop our understanding of ketamine in the use of psychiatry.