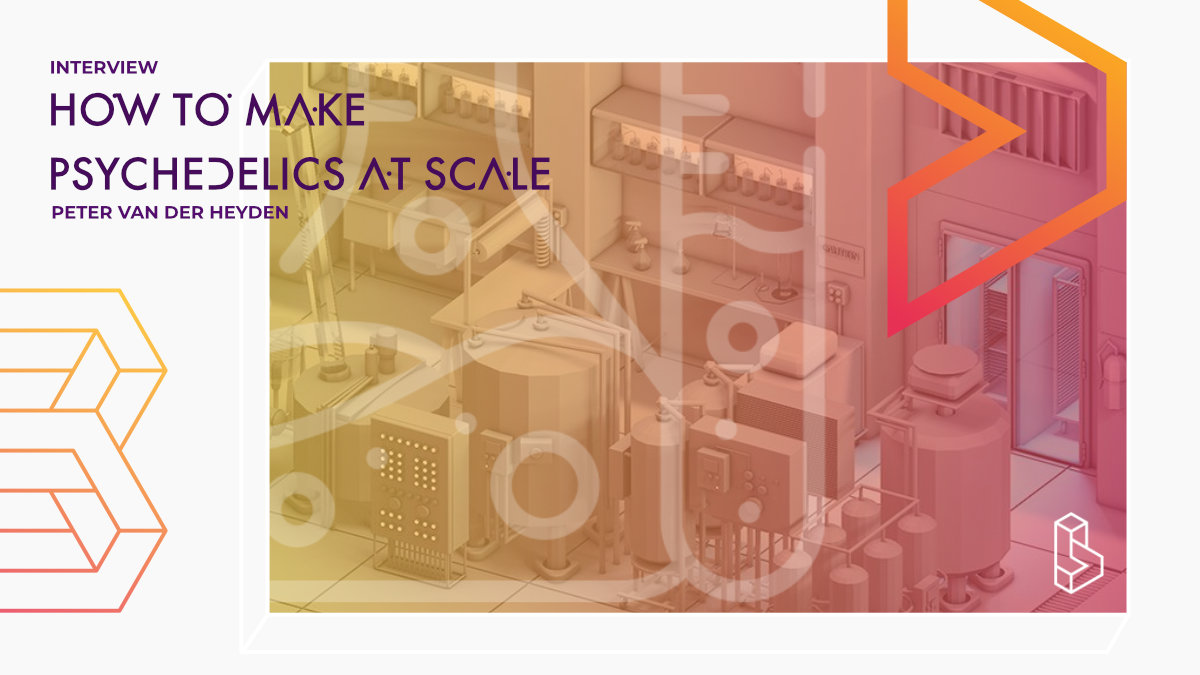 Peter van der Heyden is the Chief Scientific Officer at Psygen, a Canadian pharmaceutical scale-up aiming to provide researchers with a variety of psychedelics. As researchers have trouble sourcing GMP – good manufacturing practices – psychedelics, Psygen is filling that gap.

Our founder, Floris Wolswijk, spoke with Peter van der Heyden to learn about the philosophy and practical challenges of manufacturing psychedelics.

What is the market need that Psygen is fulfilling?

A couple of years ago, I realised that research into psychedelics was opening up again after 50 years of prohibition. But the research organisations conducting these trials were having a hard time sourcing GMP psychedelics. That is where we saw a clear gap in the market.

There’s a lot of talk about the immense benefits psychedelics can have, but ultimately somebody needs to make these substances. I like to say we make the substances everyone is talking about.

It’s true that other companies also can make psychedelic compounds. In contrast to them, we are specialists in psychedelic chemistry. The background knowledge of our team – advised by Dr Dennis McKenna & Dr Dave Nichols – spans over 50 years.

Three years ago, I met our CEO and co-founder, Danny Motyka, after being introduced by Rick Doblin of MAPS. We were both investigating starting a company to manufacture psychedelics. So, why not collaborate instead of competing? That is how Psygen started.

Currently, we’re providing research materials to many research organisations globally and building out a production facility in Calgary, Alberta in Canada. The facility has the capability to produce whatever is needed for clinical trials and is ready to produce more for when a market develops. We aim to be one of the main providers of these substances.

What currently brings customers – Psygen has 25+ customers, which include Beckley Psytech and Wesana – to you?

We have the specific knowledge to make psychedelics. Another GMP producer will have to reinvent the wheel and figure out what to do specifically to produce psychedelics.

Initially, the demand for psilocybin for clinical research was quite high. We actually couldn’t keep up with demand. But that has recently levelled off, with the market – in as far as we can call it a market – being in a downturn.

At the moment, our production is done at a relatively small scale. We are building the next stage where we will be able to produce 100s of kilograms of psychedelic APIs – active pharmaceutical ingredients – per year.

Besides our ability to produce psychedelics, we are positioning ourselves to be a one-stop-shop for everything required in terms of data related to the compounds to make clinical trials possible.

How do you expect the psychedelic market to develop in the coming years?

Like everyone else, we expect MDMA to roll out for PTSD late next year. MAPS – the sponsor of those trials – already has a source for MDMA. After market authorisation, they are required to keep using the same production partner and method. The same goes for COMPASS Pathways and their COMP360 psilocybin.

We are now seeing a move by companies that are developing treatments toward novel psychedelic compounds. Beckley Psytech, one of our customers, for instance, is developing 5-MeO-DMT.

This is where we can provide much more value than a generic GMP producer. We have the knowledge to produce what the customer asks us to make.

Switching gears, what is your perspective on patents. The non-profit Porta Sophia is currently challenging COMPASS Pathways’ patents on their formulation of psilocybin. Has that changed your approach?

It’s gratifying to see what Porta Sophia is doing. This intellectual property grab is something that rubs me the wrong way. The well-known classical psychedelics are not patentable. We have known how to make them for decades.

There is more merit if someone finds a novel way of making a substance that is really difficult to manufacture. If that’s a real breakthrough, I think it’s only right that the inventors are rewarded with patents and that the intellectual property is defended.

It is not something that we focus on in our strategy. For one, it’s expensive to go through the patenting process. Even if a patent is granted, you need to be willing to defend it. Going to court will make it an even more costly process. Instead, I would focus our work on making these substances and doing it well.

This may turn away some investors, but we’re pretty confident that we’re in a unique position with regard to manufacturing. Once the market matures in the coming years, we will be in the right position to service the whole market.

Currently, you’re producing at the scale of 500g to 1kg. What are the challenges you face in scaling up production to 100kg?

The scaling up itself is not rocket science. Usually, everything scales up linearly; the challenges come with the size of the equipment. If you want to be able to make multiple kilograms of psilocybin, you start moving into the range of reactors with the capacities of thousands of litres.

This is an issue you get into when you do batch production. The equipment tends to get very large and very expensive. The footprint is enormous, as is the amount of solvent – which isn’t environmentally friendly – that you have to use.

There are other ways of scaling up production that we’re exploring at Psygen. There are production modalities where the footprint is small, where you use a lot less solvent, and you can automate the production. Without boring you with too many details, there are alternative processes to batch manufacturing that are being implemented in the pharmaceutical industry.

Another method that we’ve looked at is biosynthetic manufacturing. We have decided to stay away from that as we see significant challenges. The economics and the practical feasibility just aren’t there from our perspective.

What is it that you’re looking forward to? What does the future of Psygen look like?

We’d like to be known as the go-to place for psychedelic APIs (active pharmaceutical ingredients). If you need small amounts of psychedelics for research or larger amounts for advanced clinical trials and then ultimately commercial amounts for post-market authorisation following a successful Phase III clinical trial, we aim to be the main provider of those substances.